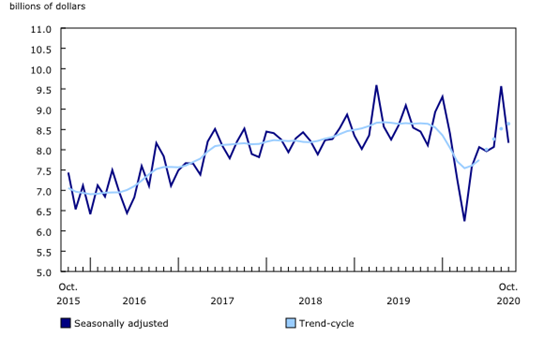 Ottawa, ON — Driven by a drop in commercial permits, the total value of building permits issued in October was $8.2 billion, down 14.6 per cent from the previous month, according to Statistics Canada. September’s peak was the second highest value on record, with October’s results more in line with recent months.

The total value of non-residential permits fell 29.5 per cent to $2.5 billion in October, after there were several large permits issued the prior month. Ontario (-$868 million) was responsible for over four-fifths of the decline.

Commercial permits set a record decline, falling 40.9 per cent to $1.2 billion in October, the lowest level since November 2011. The value of commercial permits in Ontario fell by 64.4 per cent, following a record set in September. Excluding Ontario, commercial permits for the rest of the country were stable compared with the previous month.

Industrial permits were down 19.8 per cent in October to $582 million, with declines posted in every province. Quebec (-$60 million) and Prince Edward Island (-$55 million) recorded the most significant declines, with the latter issuing a permit for a manufacturing plant worth $50 million in the prior month.

Following five consecutive monthly gains throughout the pandemic, permits issued for single-family dwellings declined 2.2 per cent to $2.7 billion in October. Declines were reported in three provinces: Ontario (-8.7 per cent), Newfoundland and Labrador (-8.0 per cent) and New Brunswick (-3.4 per cent). Nova Scotia posted the largest gain (+26.0 per cent) as the city of Halifax cleared up a previous backlog of permits.