These days, choosing a refrigerant to use in a system sometimes feels more like being a fortune teller than an engineer or technician; unfortunately, crystal balls don’t seem to work very well.

As Canada implements a plan to meet our Global Warming Potential (GWP) emission reductions required under the Kigali Amendment to the Montreal Protocol, the phase-down of halo fluorocarbons (HFCs) is beginning.  This means that several of the most common refrigerants are going to, at least partially, disappear over the next 20 years.  Refrigerants like R404A, R507A and R410A.  This comes on top of the fact that one of the last stages of the phase-outs from the original Montreal Protocol is also in progress – R22 production and imports will be eliminated at the end of this year.

The HFC phase-down is starting to have a real impact on refrigerant selection, particularly for large systems with expected lifecycles in excess of 20 years. It is a guess to predict the costs and availability of some of the higher GWP HFC refrigerants as production is decreased. So, what are the options?

R404A and R507 both have a GWP that approaches 4000.  As a reminder, global warming potential is a value that is normalized to the warming equivalent of CO2.  Releasing one pound of R404 is roughly the same as releasing 4000 lb of C02.  Let that sink in a minute…  one pound of R404A = two tons of C02 equivalent. The average passenger vehicle emits approximately five tons of CO2 every year, the same as releasing a mere 2.5 pounds of a refrigerant with a GWP of 4000.

If it sometimes feels like refrigerants and our industry are being especially targeted, they are. It turns out that refrigerant releases really do matter and make a difference. The average leak rate of commercial refrigeration systems is in the range of 25 percent per year. That is a lot of refrigerant being released to the atmosphere. 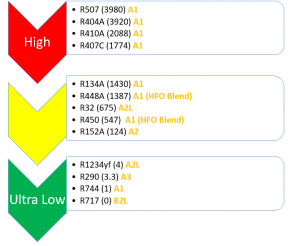 At the moment, there are several mid-GWP refrigerants in full-scale use, like R407A, that have a GWP of approximately 2200.  While this is a dramatic improvement compared to R404A or R507, the production and importation of these refrigerants are also being reduced in the phase-down and they will likely not be allowed after 2040.  2040 may seem like a long time away, but it is within the lifecycle planning range for larger systems.

For standalone systems, the transition is happening faster, a limit of approximately 1500 GWP will be in effect next year.

Additional mid-GWP refrigerants, like R448A and R449A, have been developed that have a GWP of approximately 1500. Because the 1500 GWP threshold has been used in some jurisdictions to phase out refrigerants, these blends will likely be around for a long time. In many applications, these are the lowest GWP synthetic refrigerants available that are not flammable. For R134A applications, there are several lower GWP replacements such as R513A and R450A that have a GWP of approximately 600.  Beginning in 2025, chillers will have to use a refrigerant with a GWP less than 750.

As we try to decrease the GWP of synthetic blends further, typically by using hydrofluoroolefins (HFO), the result is often a refrigerant that is flammable with an A2L classification. Work has been ongoing for years to change safety regulations to allow for A2L refrigerants in direct systems, where the refrigerant can leak directly into the occupied space.

Last year, ASHRAE published an addendum to Standard 15 allowing the use of A2Ls in direct comfort cooling applications and machine room applications. These changes will percolate through the U.S. mechanical and fire codes over the next few years. In Canada, the CSA B52 committee has added the refrigerants to the refrigerant table in the standard, but no changes have been made to provide guidance or changes for implementing these refrigerants successfully.

UL has also already allowed the use of flammable refrigerants with charge limits and we are starting to see them in terminal units, window air conditioners and dehumidifiers (Please see Fig. 1).

HFOs can have a GWP less than 1, which makes them very appealing alternatives to using HFCs and HFO blends. R1234yf, for example, is already being used in automotive air conditioning and has attractive efficiency numbers for several applications.

The natural refrigerants like CO2, ammonia, and hydrocarbons (propane, isobutane) have a large role to play in the low GWP marketplace. Already, a lot of small commercial reach-ins and vending machines are using propane and it looks like this trend will continue (Please see Fig. 2).  Ammonia is being used extensively in industrial applications and is seeing some growth in the chiller sector thanks to the development of several options that use extremely small charges.  Ammonia has the ability to use less than 0.5 lbs of refrigerant per ton of refrigeration; while it does come with an increased regulatory burden in some cases, the refrigerant itself is a very inexpensive commodity.

CO2 systems are still not extremely common; the majority of the installed systems are in Quebec. However, there is enormous interest and several projects underway throughout the rest of the country.  CO2 has challenges (which we’ve discussed in several previous articles), but it is becoming more and more attractive in a lot of commercial and industrial applications.  Walk-in cooler sized split systems are even becoming available.

Those of us who are old enough to remember the refrigerant transition in the 1990s are familiar with this landscape, but this time we have the added variable of flammability. There has not been a lot of technician training or discussion of risks and hazards at the field level. This needs to change and technicians need to learn to work with both ‘mildly’ and ‘very’ flammable refrigerants.

The products of combustion for the HFO refrigerants can be very dangerous… something anyone who has taken a face full of phosgene gas-burning R12 should realize is an important thing to worry about.  Additionally, not all the refrigerants have the same capacity or efficiency so some applications can be challenging.

Many people are wondering exactly what the future holds and what refrigerant to choose.  Unfortunately, the crystal ball is not quite clear. There are a lot of factors to consider. Safety, cost (refrigerant, equipment, and operating), refrigerant inventory and the environmental impact.

Several owners have decided that it is necessary to drive the GWP emissions down as much as possible and are insisting on very low GWP solutions for every application. In Canada, where the A2L rules are not developed, this is challenging to do. The only thing certain is that the future holds more change.

Planning for the worst

Exciting next chapter for Marie Li-Ying