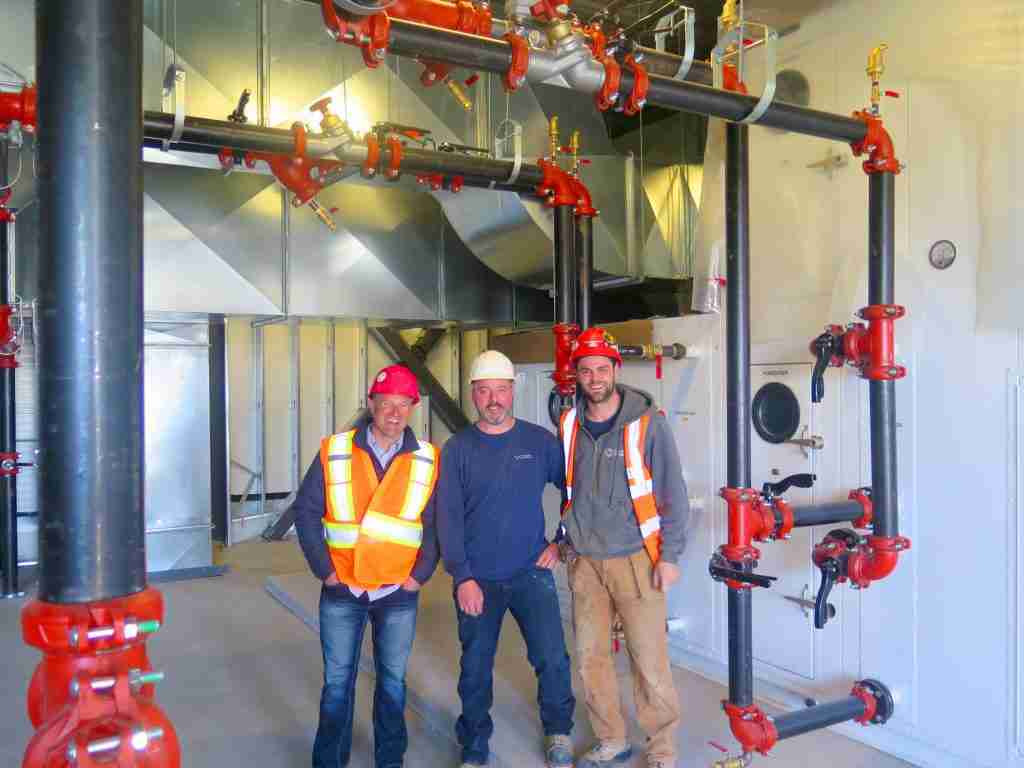 The Evolv1 project is just one of a number of ultra-efficient projects for Conestogo Mechanical, reported company president Wes Quickfall, at left, with sheet metal foreman Joe Golden and apprentice Brad Krouse.

Energy positive may sound like the name of an alternative church in the Mojave Desert, but it’s actually the way most buildings may someday be built. The Evolv1 office building in Waterloo, Ont. is an early example.

Some people put prophets, fortune tellers, soothsayers, and high tech brainiacs from the west coast all in the same category, but at this point, the Silicon Valley whiz kids seem to have been right about a few things and are winning life’s big monopoly game. In Ontario, some of Canada’s brightest IT prodigies have predicted that they can still have success in the Waterloo, Kitchener and Cambridge area, out of the ashes of the slowly expiring Blackberry conglomerate.

In 2015 six developers christened what they call the “idea quarter” in this area, home to companies like Google, OpenText, Huawei and SAP. Sometimes called ‘Silicon Valley North,’ this region boasts 175 tech companies employing about 17,000 gifted prodigies. It has added 8,400 tech jobs in the past five years and was recently named Canada’s fastest growing tech talent market (second in North America), by CBRE-Coldwell Banker, the world’s largest commercial real estate and investment firm.

Developers working on building Waterloo’s Evolv1 high tech mecca include Spear Street Capital from San Diego and the Cora Group. “Building science has advanced to the point that there is now a broad spectrum of commercially viable clean energy alternatives available,” said Cora’s COO Adrian Conrad. “They allow us to build in an energy positive way and address our greenhouse gas challenge.” 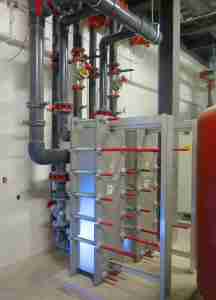 A heat exchanger protects both the system and the aquifer.

As if to drive home Conrad’s point, Conestogo Mechanical president Wes Quickfall describes a long list of clean energy initiatives his company is installing, while walking through the Evolv1 site. The building’s heating and cooling system draws energy from an open loop water source geothermal system that taps into the Dundas Valley aquifer, located more than 350 feet below the surface and well below the Waterloo Moraine, an underground water source that supplies drinking water in the region.

“It operates at 360 gallons per minute. There is one eight-inch supply well and one eight-inch return well, providing 300 tons of cooling and heating,” explained Quickfall. “Then there is a separate six-inch well just for monitoring the aquifer. It’s actually quite amazing that it could be an open loop system, which is relatively inexpensive.”

The aquifer water is pumped into a heat exchanger with heavy-duty welded plate construction and double-wall air space contamination protection. These measures protect both the conditioning system and the aquifer below.

Condenser water is also supplied to nine Mitsubishi geo source VRF heat pumps (three per floor). Each unit has 18 fan coil ports. Thermal heat is conveyed from condensing units out to fan coils with a series of solenoid valves moving refrigeration back and forth. In all, they deliver heating and cooling through about 120 variable speed modulating fan coils in about 110,000 square feet of space, in sizes ranging from 1.25 tons to four tons.

There are also SolarWall sections on the south side of the building and mechanical penthouse walls feeding pre-warmed air into a Haakon make-up air unit. It uses a six-foot diameter energy recovery wheel to transfer heat to incoming fresh air. Inside the atrium, a three-storey plant wall improves indoor air quality.

The entire mechanical system is controlled by a Carrier I-Vu building automation system. It is web-based, easy to learn and flexible. It allows users to monitor, test and tweak individual settings without a lot of programming and set up alerts. Due to the integration capabilities of BACnet and I-Vu, everything works together smoothly.

The building saves water by collecting rainwater in a large cistern and supplying it to toilets for flushing. Plumbing fixtures are all low flow. Windows are triple pane and the LED lighting system dims automatically with the help of occupancy sensors. Instantaneous electric hot water heaters supply domestic hot water to bathroom groups on each floor, and the kitchen for the office part of the building. 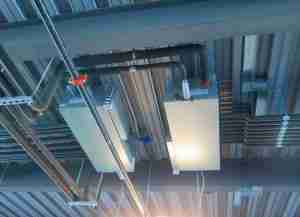 There are three VRF units per floor with up to 18 ports in each.

All the office building systems, including domestic hot water heaters and a backup boiler, are powered by electricity. More than an equivalent amount of electricity for these systems and for computers, phones, electric vehicles, and so on, will be generated by a solar photovoltaic system.

It will consist of 754 heliene mono-crystalline 72-cell panels on the roof of the building and 1440 panels in the parking lot. This will provide a maximum instantaneous output of 620 kilowatts of AC power, or about 105 percent of the facility’s expected annual energy usage, reported Mike Kraus of Vigor Clean Tech, Petersburg, Ont.

Cora was originally targeting leadership in energy and environmental design (LEED) platinum, but instead, the project was awarded the first ever LEED zero carbon designation by the Canadian Green Building Council.

“We wanted to demonstrate that zero carbon, energy-positive buildings are possible without having to invest significantly more,” says Conrad. The project is expected to come in at less than $4 per square foot.

Countries and regions around the world are moving building codes toward net-zero over the next 10 years. Net-zero occurs when a building produces as much energy as it consumes. British Columbia has established the year 2032 for net-zero residential buildings. It’s voluntary, but it’s in the building code, which suggests it might become mandatory.

Ottawa is working with the Green Building Council and a year ago there was talk of net-zero targets. Despite political uncertainty in Ontario and Alberta, it’s likely that codes will move toward net-zero everywhere within a few building code cycles.

In the U.S., according to the Net-Zero Energy Coalition, code changes and net-zero project completions are led by California, Oregon, Massachusetts, New York, and Connecticut. In 2017, there were 6059 net-zero buildings completed in the U.S., a 49 per cent increase over 2016.

Meanwhile, in California, the smarty-pants and soothsayers in their Ray-Ban shades are predicting a scorching bright future with “energy positive” becoming the next popular cult. Maybe we had better all pay attention, just in case they’re right again. 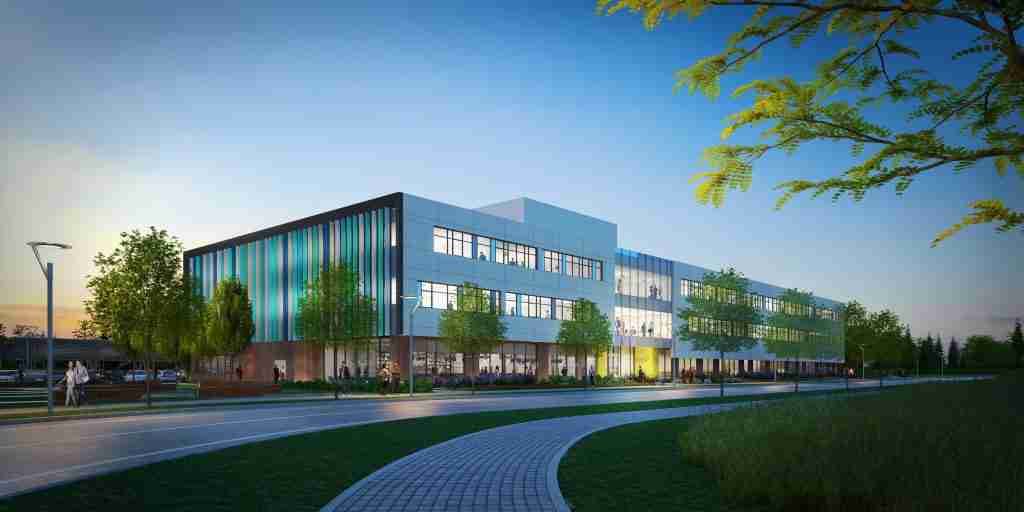 An artist’s concept of the completed building.