We asked plumbing manufacturers and suppliers to suggest one tool that every plumber should have in their truck. The suggestions that came back covered a wide range of products – some of them new and some as much as 50 years old.

The ideas ranged from the simple and inexpensive to the complex and, well, more expensive. Some of the more inexpensive tools are a no-brainer for anyone doing plumbing service. Those at the other end of the spectrum may or may not make sense depending on the type of work you do.

Every plumber has a toilet plunger. In fact, just about every homeowner has one too. Some years ago, Calgary plumber Mike Scheuerman thought: “Crap, there’s got to be a better way.”

So, he set out to build a better toilet clog clearing tool, using plumbing pipe and other readily available materials. That was the original Clog Boss.

A number of years and one CBC Dragon’s Den appearance later, the Clog Boss has been refined into a very quick and effective tool for clearing toilets.

A conventional cup-type toilet plunger fits over the drain, which allows pressure to escape backward through the siphon jet and out the rim jets, making it difficult to maintain pressure. The “Universal Toilet Tip” on the Clog Boss fits deep into the drain, beyond the siphon jet, isolating the trap and putting the full pressure into clearing the clog.

By pushing and pulling on the handle, the plumber can generate positive and negative forces.
These powerful hydraulic impulses can be used to tear packed waste solids into smaller parts, reducing the overall viscosity.

Once this is achieved, the remaining contents can be flushed, and normal service can be restored. “This way you can do your business and keep things moving,” says Scheuerman. 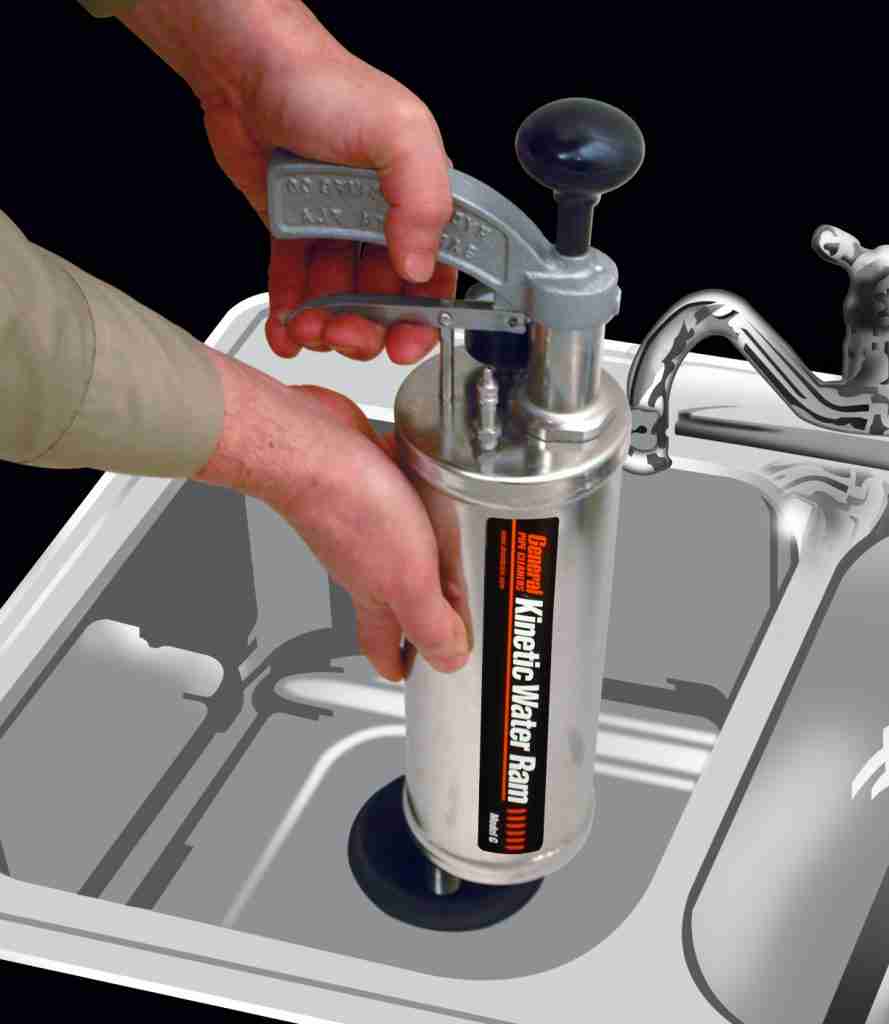 The Kinetic Water Ram from General Pipe Cleaners could be considered the grand-daddy of tools in this selection. It has been around since the early 60s and has been refined over time.

And while it may look somewhat similar to the Clog Boss, it functions in a very different way and is designed to clear blockages much further down the drain.

It uses compressed air to generate a shock wave that pulverizes the stoppage instantly. The shock wave bypasses vents and goes around bends to reach the stoppage with only two percent loss of power.  The built-in pump and pressure gauge let the operator select the right amount of force for each job. It is designed to clear drains from 1-1/2 to four inches.

If you do need to clear a toilet, General offers a toilet attachment – a cone – that screws into the tool to get a better seal in the toilet bowl.

The Quick Sweat kit from LynCar is not exactly a new tool either but it’s useful when a plumber needs to block the flow of water in half to two-inch pipes. “The advantages of this tool over the plumber’s bread is that you can go right through a valve – whereas the plumber’s bread is only good up to the valve,” said LynCar’s Andy Fretz. “You can shut off the water past the valve, take off the old valve, and put on a new one all without shutting down a whole system.” The copper plug tool comes with a flexible 24-inch steel cable that can slide through elbows and is interchangeable for different size copper pipes. “The plumber’s who have bought this tool say they wish they had bought it from the beginning if they had only known about it,” Fretz added. 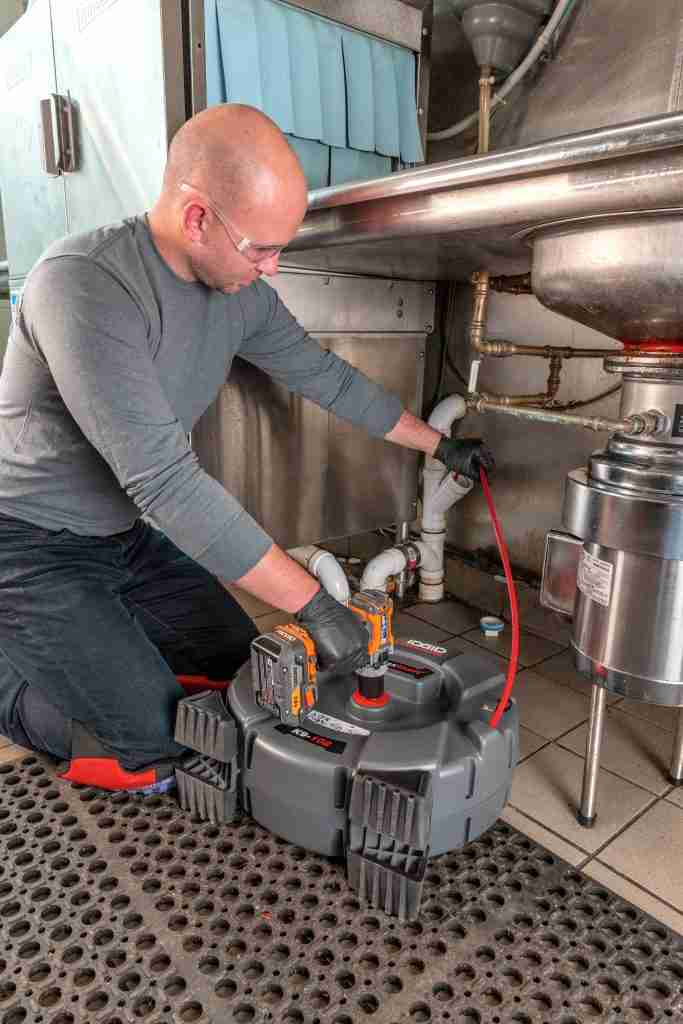 The new FlexShaft high-speed drain cleaning machine, available in May from Ridgid, has a unique feature. A camera enclosed in a nylon sheath goes down the drain with the cable to record the progress in breaking up the blockage in real time. “We by no means say it replaces all drain cleaners – this isn’t the last drain cleaner you will ever need – but it is a great compliment to a plumber’s inventory for what they use to clean drains,” said Wyatt Kilmartin, vice president and general manager of underground technologies for Ridgid.

Powered by a cordless drill, FlexShaft is designed for soft to medium blockages in pipes from 1-1/4 to four inches and up to 70 feet in residential and commercial applications.

Ridgid released a line of drain cameras alongside FlexShaft that can remain in the pipe throughout the entire drain cleaning process.  For more information, please visit www.ridgid.com. 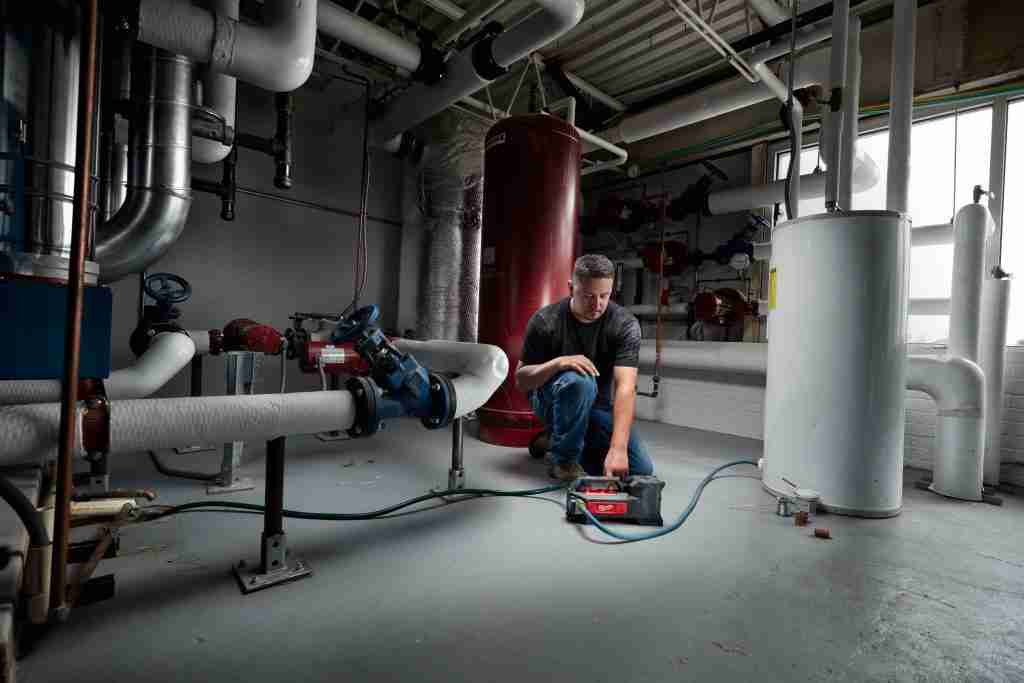 Who wants a mess?

There are many occasions when a plumber needs to drain a DHW tank or a water system and there’s no drain nearby.

The new cordless M18 Transfer Pump from Milwaukee Tools is designed for just such occasions, allowing the plumber to pump the system out to the nearest drain or even to the outdoors if needed. With a self-priming pump, the plumber can connect and go quickly. The tool’s flexible impeller and powerful pump moves water at up to 480 gallons per hour, generating up to 18 feet of lift and producing up to 75 feet of head height.

The 18-volt pump is powered by the same REDLITHIUM battery packs used in the company’s other tools. It can move up to 240 gallons per charge on an XC5.0 battery pack.

The company’s onboard REDLINK Intelligence control system recognizes when the transfer pump stops moving water and automatically shuts itself off to avoid dry pumping, optimizes performance, and provides overload protection.

For more information, search under plumbing tools at www.Milwaukeetool.com.

We’re not so sure if every plumber needs this tool, but if you’re in the pipe fitting or steam fittings business the Exact PipeCut 360 Pro pipe saw from Mag Tool will allow you to make fast square cuts in steel or plastic pipe from three to 14 inches in diameter. It is designed for use with all pipe materials and will cut steel pipe up to ½-inch wall thickness and plastic pipe up to two-inch wall thickness.

Green, yellow and red “traffic lights” on the saw provide a visual indicator for the operator to alert them if they are overloading the saw, rather than relying on feeling and hearing. When the saw is overloaded, an intelligent circuit board turns down the power to avoid burning out the armature. “This was a problem in the past when the saws were not used correctly,” reported Mag Tool’s Mark McGuire.

A laser light marks the cutline. An additional gripping handle has been added on the leading edge of the saw to help guide the saw where it cannot be rotated and the material is stationary. “It is also quite handy for simply picking the saw up and moving it from cut to cut,” added McGuire.

And, on this latest version, the mechanism for squaring the saw has been simplified to make it quicker and easier to adjust, with an eccentric wheel on the saw for fine adjustments.

Expanding on their current FlexVolt system, DeWalt has released a 60-volt in-line stud and joist drill with a unique clutch system.

The e-clutch system was designed specifically for this tool to protect the user. “When the drill stops turning at the bit in a jam situation – the drill starts spinning and can lose control. Our drill has the e-clutch which shuts down the drill pretty much immediately to protect the end user from a tool out of control,” explained Stephen Blain, commercialization manager for DeWalt Canada.

In high or low speed, the e-clutch system can sense tool motion and stops the motor when the drill binds. The user knows that the system has been activated when a LED light illuminates.

The drill includes a two-position side handle, shallow nose, a half inch keyed chuck and chuck key holder, and a knuckle guard.

Planning for the worst

Exciting next chapter for Marie Li-Ying