“It’s been quite a ride,” stated Marie Li-Ying, business manager of fluorine products at Honeywell. “I’ve enjoyed every minute of it. You’ve got the highs and lows, and interestingly, being with the same company for such a long period of time, I’ve been able to see how business has changed over the years.” Li-Ying has been with Honeywell for 30 years as she announces her retirement.

Over her career, she has put plenty of time and effort into volunteering at associations, including her work at Refrigerant Management Canada (RMC). It was her work with this association, managed by the Heating, Refrigeration, and Air Conditioning Institute of Canada (HRAI), that she received the Warren Heeley Environmental Achievement Award in 2021. She was instrumental in the creation of RMC, which is essentially an environmentally responsible program. It manages the disposal of Canada’s stocks of surplus halocarbon refrigerants for the refrigeration and air conditioning industries.

“You are well deserving of this award. On behalf of HRAI, we wish to thank you for the countless hours that you have spent volunteering your time and for helping Refrigerant Management Canada with our simple, easy to use, industry-wide collection program for the final disposition of the end of use of refrigerants in a safe manner,” said Caroline Czajko, director of environmental services and the manufacturing division at HRAI, in a video awarding the honour to Li-Ying.

According to Li-Ying, Refrigerant Management Canada is the first of its kind, worldwide — “Other companies, other countries have looked at it and it’s become something to be proud of as Canadians.” She is currently the past chair of the board of directors and previously was the treasurer for RMC.

Additionally, the work she has been a part of during her tenure at Honeywell has been something she is quite proud of, especially the amount of money the company has donated in research and development. “Overall, when you look at what the company has done with this new product, the HFO or hydrofluoro-olefin, it’s equivalent to like 688 million barrels of oil that you’re removing from the atmosphere.” 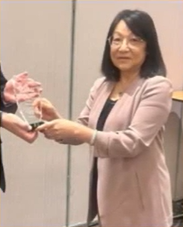 She initially joined Honeywell in the midst of the phasing out of CFCs. “It was quite hectic initially and then it would slow down,” said Li-Ying. “It makes you feel good when you’re part of an industry that’s looking ahead at the environment in general. The sustainability of the product and what we can do to make sure that the carbon footprint that we’re leaving is responsible as well.”

Being able to pay-it-forward is something that Li-Ying has tried to embody in both her personal and professional life. During our conversation, she remained quite humble regarding the work she has done for the industry over the past three decades.

It’s to no surprise that she said that she hadn’t quite accomplished all that she could have in her career. But she did remark that very few could probably say that they have done everything that they’ve set out to do. “That goes part of always learning and wanting to do more,” she said. “I’m always surprised and humbled that anyone would ask me to be a role model.”

Growing up in a Chinese family, she said that oftentimes the males of the family took on the more dominant role, but that her grandmother was unique and ahead of her time. “Even as a female, you need to do the best you can and support yourself. You’re not supposed to be dependent on anyone just because you’re female,” said Li-Ying. “My mom and my grandmother were very great role models.” When she first started in the industry, she often found herself being the only woman in a lot of her roles.

It hasn’t always been easy juggling a healthy work-life balance, especially over the pandemic, but she is looking forward to some “me time.” She and her husband are thinking about doing some renovations to their home. There has also been some planning to do some travel. “We love to see exotic places. We’ve done a fair bit of Europe, but we haven’t done much of Asia. So, we’re looking forward to doing more travelling.”