The Toronto police are treating the cases as racist hate crimes and have began an investigation.

Two nooses were found by black construction workers on June 10 at Michael Garron Hospital in East York. Another noose was discovered at 81 Bay Street in Toronto on June 25. Both construction sites are managed by EllisDon, with the Bay Street site also managed Govan Brown.

A third construction site, managed by The Daniels Corporation, reported a noose was found at a worksite in the Regent Park neighbourhood near Dundas Street East and Sumach Street on June 26.

“These are disturbing and shocking racially-motivated incidents that are denounced by everyone who works in our industry,” said Richard Lyall, president of the Residential Construction Council of Ontario (RESCON). 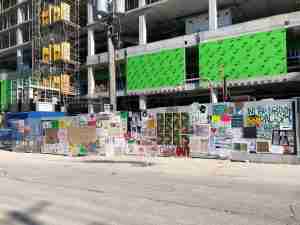 “These are acts of cowardice and racism that have no place in our industry nor society. The perpetrators must be caught and prosecuted. Our industry and members have zero tolerance for racism and discriminatory behaviour of any kind. Hanging a noose is a hate crime. These perpetrators will be terminated and no longer welcome in the industry.”

RESCON commended EllisDon, Govan Brown and the Daniels Corporation for notifying police when the nooses were found and are calling on the law to do everything in its power to find those responsible.

“Whoever did this is merely attempting to sow division and hatred. These incidents must be investigated to the fullest extent. We can not allow this to go unpunished,” said Lyall.

Anyone with information about the incidents is encouraged to contact Toronto Police Service at 416-808-2222 or leave an anonymous tip with Crime Stoppers at 1-800-222-8477.