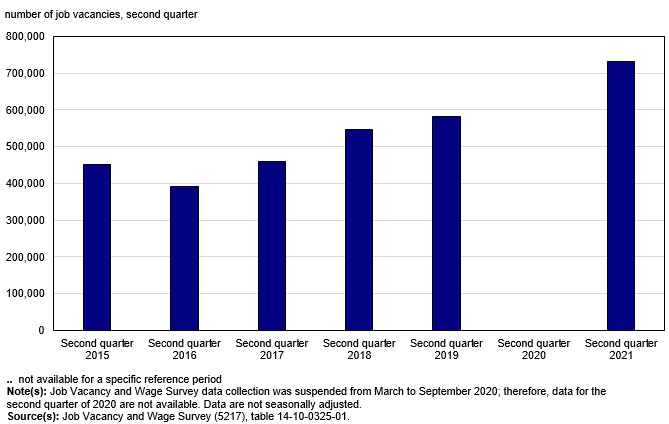 Ottawa, ON—The construction sector is reporting the highest number of vacancies since comparable data on labour became available back in 2015. Vacancies in construction increased by 19,900 (up 46.7 per cent) over two years to 62,600 in the second quarter of 2021, reports Statistics Canada.

The increased job vacancies were led by the specialty trade contractors subsector (up by 14,300 or an increase of 53.0 per cent)—which comprises establishments primarily engaged in trade activities such as masonry, painting, or electrical work, followed by the construction of buildings subsector, which was up 4,400 or an increase of 40.8 per cent.

A large portion of the rise in job vacancies in the construction sector was made up of construction trade helpers and labourers (up by 8,900) and carpenters (up by 3,300), according to the report.

Following the data released by the Labour Force Survey (LFS), Statistics Canada reports that there were 731,900 job vacancies in the second quarter of 2021. The survey recorded that during the quarter, as public health measures were tightened in several jurisdictions, and employment fell for two consecutive months and then rebounded in June.

Job vacancies in all provinces

The changes in the average offered hourly wage can be caused by many factors, including wage growth, shifts in the industries and occupations, or the types of jobs being filled.