Everybody knows that tariffs announced by the United States May 31 on Canadian steel and aluminum can’t be a good thing for the industry. And everybody surmises that Canadian counter tariffs that came into play July 1 won’t help. 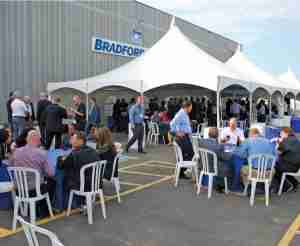 Last August, Bradford White made a major investment in its Canadian operations with a new 75,000 sq. ft. facility in Halton Hills, Ont.

On July 11 industry associations on both sides of the border sent a letter urging U.S. and Canadian officials to work towards a speedy resolution. Sent to Canadian Minister of Foreign Affairs Chrystia Freeland, U.S. Secretary of Commerce Wilbur Ross, and U.S. Ambassador to Canada Kelly Craft, the letter states, among other things:

The letter points out that associations and industry companies on both sides of the border have worked together for decades, leading to thousands of jobs in a multi-billion-dollar industry, along with many additional jobs in things like mining, advanced manufacturing, information technology and the service sector.

“Immense progress has been made over the past 30 years and our economies are demonstrably more stable when working together… We urge both sides in this dispute to act judiciously and consider the ramifications these tariffs will have on both nations.”

In a long list that includes steel, aluminum and food products in the federal Department of Finance’s Notice of Intent to Impose Countermeasures, gas-fired storage type water heaters are the only industry product specifically targeted and facing the Canadian 10 per cent counter tariff. This provides an artificial incentive for fuel switching, notes the letter.

Companies that have thrived under both the original Canada-U.S. free trade agreement and the North American Free Trade Agreement (NAFTA) by having substantial operations on both sides of the Canada/U.S. border may now find themselves paying both U.S. and Canadian tariffs.

All four major manufacturers of storage tank water heaters buy steel from various sources, both in Canada and the U.S.

Those that manufacture in the U.S. with Canadian steel face a 25 per cent tariff on steel and the 10 per cent Canadian counter-tariff when the finished product is imported into Canada.

Bradford White has written a letter to Canadian Finance Minister Bill Morneau asking for relief from the Canadian counter tariff.

Giant Inc. manufactures gas and electric storage water heaters at its Montreal plant with Canadian steel from Hamilton, Ont. and, as a result, should be protected.

However, it is also impacted by tariffs applied to components that must be imported from the U.S. It also stands to lose its U.S. export business.

“Things are even more complex than most can imagine,” notes company president Claude Lesage. The Canadian mills sell steel in U.S. dollars at U.S marketprices. Over and above the already inflated steel prices that have increased significantly over the past eight months, he expects that U.S. tariffs will further push his cost up substantially.

NAFTA hasn’t always been helpful to Canadian manufacturing. He finds his company competing with water heaters made in Mexico with offshore steel. Rewriting NAFTA to level the playing field with Mexico is critical, he added.

For the first time in history, the Canadian government has carefully targeted counter tariffs to states held by Republican politicians. In the 2016 U.S. election, Michigan, where Bradford White manufactures its water heaters, for example, voted Republican.

There has been a great deal of uncertainty over how the trade war is going to affect pricing. Manufacturers and wholesalers have struggled with what to tell their customers.

“We’re waiting to see how things evolve. I can’t send a bulletin out to our customers because it’s a moving target… I don’t know where it’s going to go,” said David Morden, president and CEO of Morden National Sales and Marketing, Wallaceburg, Ont., which distributes Olsen furnaces and Utica boilers in Canada.

There are no easy answers for the industry, added Ralph Suppa, CIPH president and general manager. Just before U.S. President Donald Trump’s Twitter tirade against Canadian Prime Minister Justin Trudeau on June 9, the U.S. and Canada reaffirmed a commitment to work together to eliminate unnecessary differences between the two country’s regulatory frameworks through the Canada-United States Regulatory Cooperation Council, made up of trade officials from both sides of the border.

“On the one hand they want to work together and on the other hand we’ve got tariffs and the NAFTA negotiations. People wonder, how do we make sense of all this?” said Suppa. “I think that’s a big part of the challenge that we are all facing.”

The HRAI sought input from members for a submission to the federal government. It didn’t receive any and when Martin Luymes, director of programs and relations, asked members why, “They basically said: ‘What are we going to say?’ They are having a hard time figuring out exactly what the impact is.”

As well, he added, “We know that anything we say is not going to deter the government. It’s not like the government was thinking: ‘Should we do this?’ It was going to happen, period. It is being done for reasons that have nothing to do with what’s good for the economy or consumers; it’s a retaliatory measure that we have to do. On the world stage, we have to show that we don’t back down to bullies.”

At this point, the key is to make sure the government is aware of the impacts on the mechanical industry with things like the letter and ongoing communication with officials, he added.

CIPH and HRAI have organized a panel of experts to hold a session for the industry to help them deal with some of the market changes resulting from the trade war. On Aug. 8 from 11 a.m. until noon CIPH and HRAI will be running a complimentary webinar, with Jonathan O’Hara, co-chair of International Trade Group and John Moccia, director of Regulatory Affairs Canada scheduled to speak. Follow the link to register.