It’s a struggle to change out mechanical room components in industrial, commercial and institutional (ICI) retrofit projects when the operation of the building cannot be disrupted.

The Atlantic Canada division of Wolseley, a national plumbing and HVAC/R wholesaler, decided to come up with a solution. Staff built a trailer-mounted “mobile boiler room” than can be tied into a building’s mechanical and control systems while equipment is changed out. It also provides construction heat.

In 2015, Donnelly developed an improved version with two 850,000 Btu/h Lochinvar boilers, Armstrong pumps and heat exchangers for 1.7-million Btu/h of heating and DHW.

The latest version, built this year, also has two 850,000 Btu/h boilers with a 7-/2 horsepower pump that can move 200 gallons per minute and two one million Btu/h heat exchangers, reported Donnelly. It was displayed in the parking lot of the MEET Show May 18-19 in Moncton.

This allows Wolseley to offer one million, two million or three million Btu/h in auxiliary heat. Two trailers can be combined to provide up to 3.4 million Btu/h.

For domestic hot water, a glycol loop provides heat to the heat exchangers. They can tie into the building system or into indirect tanks supplied either by Wolseley, the contractor or building owner, reported Donnelly.

The trailers can be parked as far as 200 feet from the building and operate either direct or as a primary/secondary loop system.

The trailer ties into the building’s control system. It is also connected back to Wolseley by Wi-Fi so that if a fault code occurs, staff know right away and can usually make any required adjustments without going to the site, explained Donnelly. 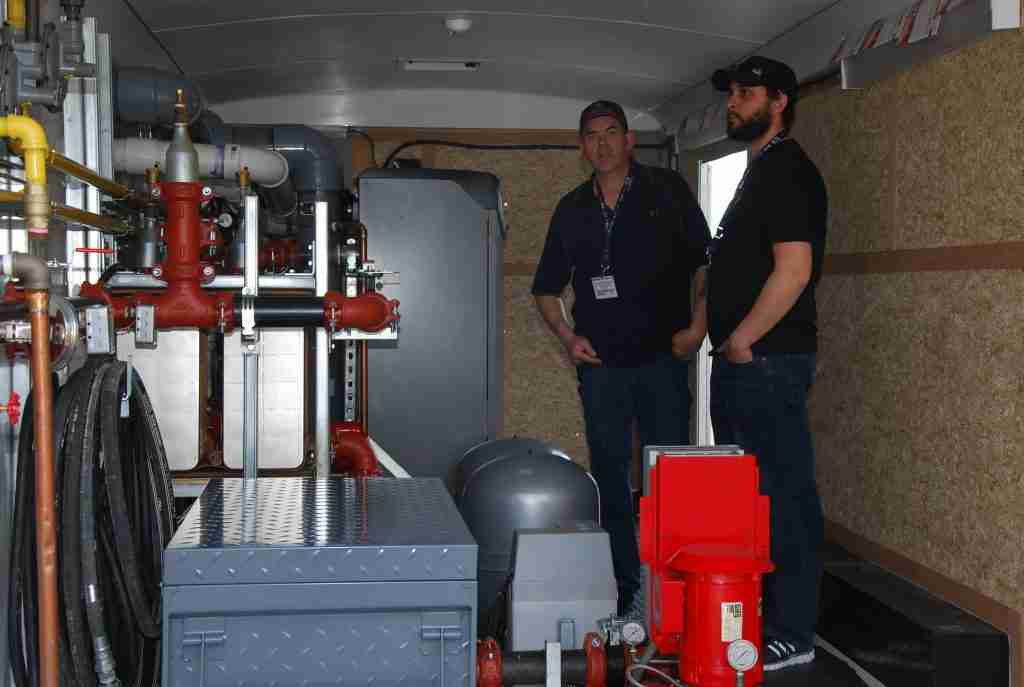 The inside of the trailer is organized for easy efficient use.

The mobile boiler rooms have been used in over 30 major projects, including the conversion of a 200-unit seniors building from electric heat to natural gas and doing a boiler change-out at a 232-room four-star hotel without affecting the guests during construction. In another case, one trailer provided DHW for a truck stop for almost 90 days while the existing boiler room was converted.

A recent project included bringing emergency heat to a church in Amhurst, N.S. Two old sectional boilers suffered catastrophic failure just before Christmas – the busiest time of year. It took just 45 minutes to tie the trailer-mounted boiler plant into the church system. The auxiliary boilers kept the church running through the Christmas season until new boilers could be installed.

During the recent winter construction of a 12-storey Halifax building, one trailer provided construction heat through the winter. As each floor was added, four hydronic air handlers were placed for a total of 48 by the time the building reached its full height.

The hydronic air handlers have a number of advantages over propane “salamanders,” remarked Donnelly. They don’t produce fumes and humidity, improving worker comfort and avoiding moisture-related problems with drywall and paint.

Setup is usually quick. Wolseley staff bring the trailer to the site complete with all hoses and fittings. They tie into the electrical and gas and get the unit running.

The trailers, based out of Halifax and Moncton, are used all over three Atlantic provinces. Wolseley Atlantic is also looking at putting a trailer in Newfoundland, reported Donnelly.