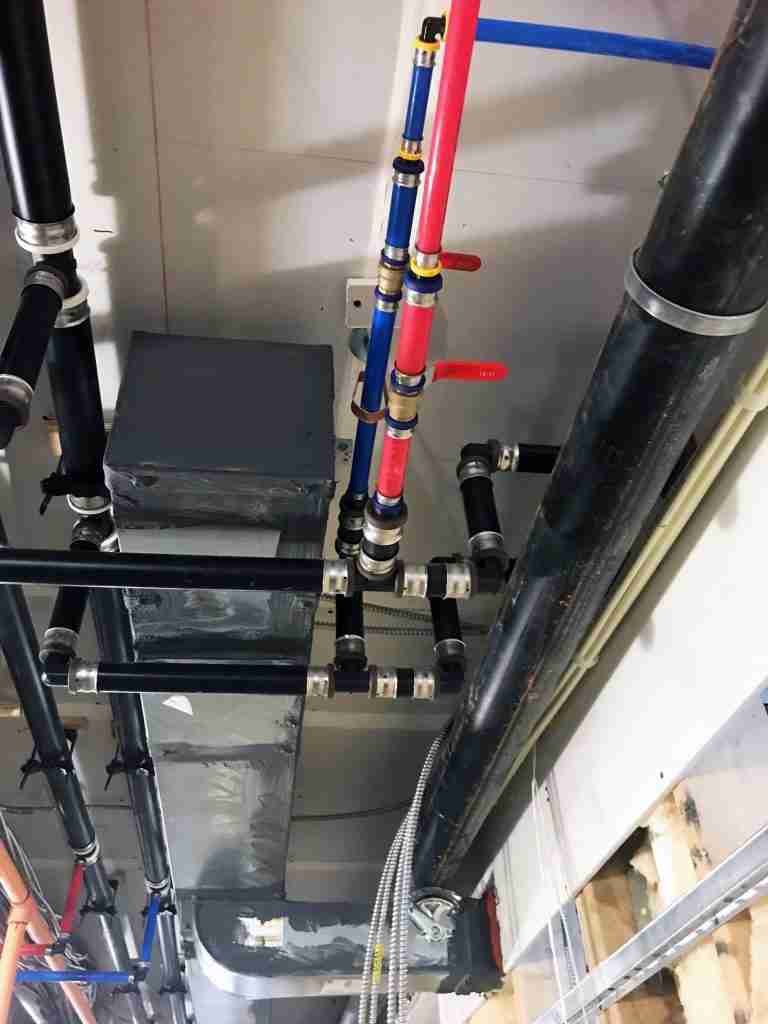 The use of PEX piping has solidified within the plumbing and heating industry after its initial introduction back in the 1970s. Plumbers, engineers, designers, architects, and HVAC technicians were so used to using copper and other types of piping material that the change occurred slowly.

Once accepted, however, the PEX market accelerated. “The initial issue was getting people used to something that wasn’t copper. This was the first challenge that copper had when they were trying to convert people from black iron pipe,” said Kolyn Marshall, system design engineer for Watts.

New applications for PEX are still being created today. “People tend to play,” said Marshall. Solar collectors can use a combination of PEX and copper to transfer heat. One thing to keep in mind though is that PEX can deteriorate if exposed to high levels of UV, which limits any outdoor application where the piping is exposed.

“I think PEX is a pretty amazing material and there will be more applications in the future that we can’t quite guess at this time,” said Wade Peterson, vice president of sales and marketing for HeatLink, Calgary.

“If we could find some way to grow and make it more of a cohesive hybrid situation where we have hydronic heating and radiant cooling that works more harmoniously together, I think that is the real new frontier.”

PEX manufacturers see the market continuing to grow. Everyone believes PEX is here to stay.

In the residential single-family home, contractors must look for the cheapest possible price when installing PEX, while in commercial applications they must look for consistency, performance, delivery, and then cost, argues Charlie Harte, general manager of Canada for Uponor, Mississauga, Ont.

But whether or not there will be other types of piping that will take part of the market share remains to be seen. 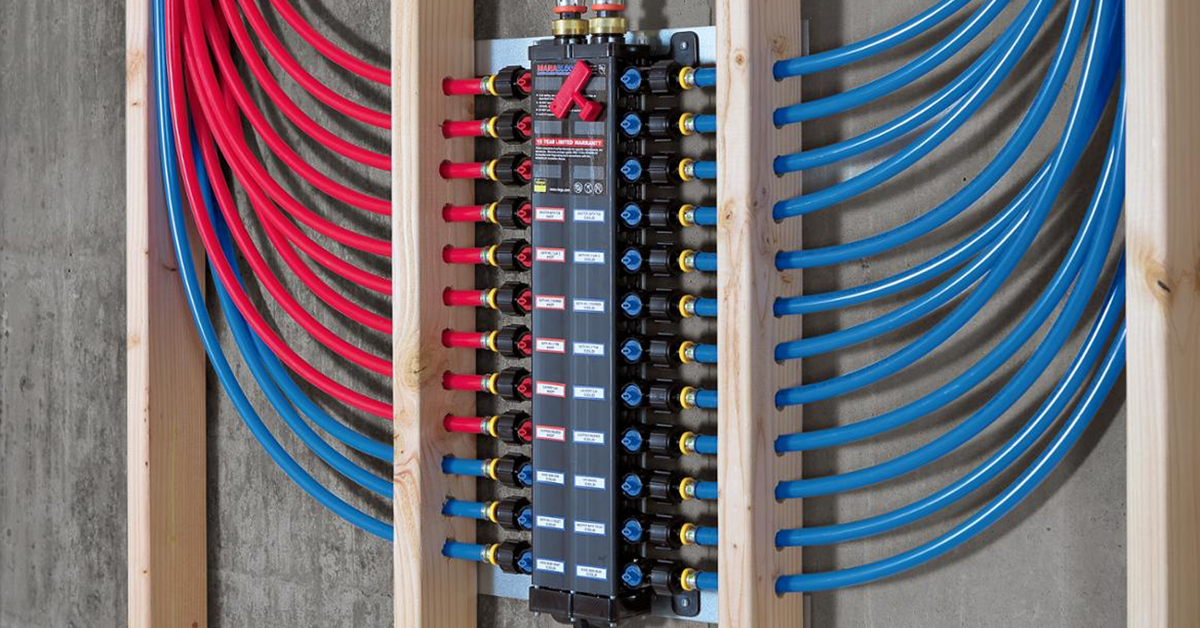 In this multi-unit building, manifolds distribute hot and cold water to each suite.

For Mike Martin, vice president of the western region for CB Supplies, he believes that PEX might need to share the market in the future. “There is going to be other products that might take parts of the market.” In fact, CB Supplies also manufactures PERT tubing, as reported in a previous issue of Plumbing & HVAC. PERT is now being used in many of the same hydronic and potable water applications as PEX.

Today PEX dominates the residential plumbing market and is the staple pipe used in radiant heating applications. A previous article in Plumbing & HVAC, April 2016 explored the expanding use of PEX in commercial applications and reported reluctance from some engineers and designers to adopt PEX for commercial buildings. Today, that reluctance appears to be dwindling.

“We are continuing to see more people in commercial spaces – contractors, designers, engineers – who previously were more resistant to PEX adopt it with more willingness and excitement. And that’s going to really continue to drive the multi-family business and the residential business which has already over 90 per cent adopted PEX,” reported Seth Larson, plastics product manager for Viega, Broomfield, Colorado.

The industry appears to agree that PEX piping is making a move in commercial applications. But not quite in every profession in the industry. “I would agree PEX has made a storm into commercial applications but there is a delay of a pickup from engineers. As the engineering consultant groups really turn over, as the older employees set in their ways retire, the newer engineers are more open to ideas that seem to be heinous to their bosses,” explained Harte.

As previously stated, there is a concern for what types of piping would next begin to take some of the market shares away from PEX. Competition is now coming from within the plastic piping industry: PERT. It has only recently been adopted within the certifications and codes in Canada. (For a more thorough look at PERT, check out our article in the Dec. 2018 issue.)

Peterson isn’t the only person to question the codes for PEX and PERT. Dale Hanscomb, sales and location manager of building solutions for Rehau Industries, Burlington, Ont., argued that the current codes maintain a fair minimal bar for the industry. However, he notes that the codes could be tightened to ensure better systems. 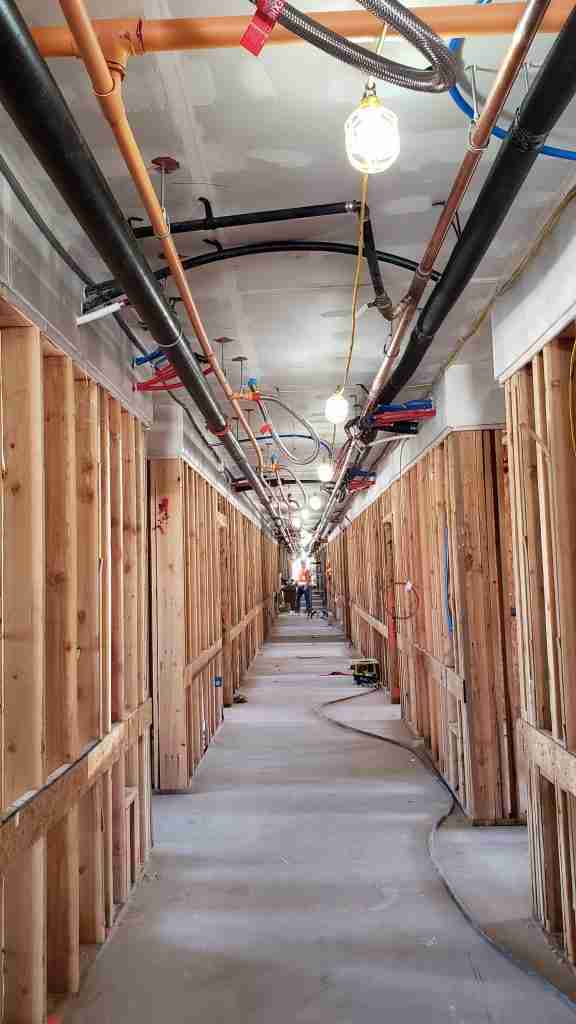 While this article is about PEX, the reality in just about every building today is that multiple pipe materials are used depending on the application and the codes.

Peterson suggested that codes need to create different categories for the three different types of PEX – PEX A, B, and C. Three methods can be used to crosslink polyethylene into PEX. With PEX A, peroxide is used as the cross-linking agent, PEX B uses silane as the cross-linking catalyst, and in PEX C, an electron beams cross-links the HDPE molecules.

Most people agreed with Peterson that the codes are pretty good, including Martin who explained that the codes in Canada are helpful for the industry as a whole.

Industry standards such as ASTM F876 and F877, and CSA B137.5 were developed specifically for PEX tubing and fittings, and all piping materials used for potable water must be certified to NSF/ANSI/CAN Standard 61 for use in Canada, reports Peterson. It originally received a product standard from CSA back in 1984 and incorporated into building codes around 1995.

PEX has been part of the piping industry so long at this point that those that are only making the switch now can be described as one of the late adopters. The advantages of PEX were repeated by almost every person interviewed for this article. This includes ease of use and installation, fewer fasteners required, flexibility, durability, no torch or soldering required, lack of corrosion, less cost, longer life, lighter, and easy to learn.

Copper pipes can be susceptible to corrosion due to aggressive water while PEX is immune from that, reports MacNevin. He also notes that there is a security benefit for PEX compared to copper which can see issues from thieves stealing copper pipes from job sites.

The important note for contractors is that since the basic performance of PEX piping will be the same, they should look at what accessories for the pipe are highlighted by the manufacturer to determine which product is best for the installation, explains MacNevin.

Fittings matter. PEX is typically joined by compression (crimp or press) or expansion fittings. Some fittings can restrict flow, so that’s something to consider.

Like any type of product, there needs to be some training and education to understand how to properly install the piping. “Every building is different, and you don’t want to just take your copper system and then put a PEX system on it,” explained Larson.

“We always encourage plumbers to get a proper training course, even if it’s for a half a day, just so they know the joining system correctly, how tightly they can bend it, and how often to fasten it,” said MacNevin.

Another challenge for PEX piping is that chlorine, in extreme applications, is known to stress the pipe. This usually only occurs when municipalities over-chlorinate water to kill bacteria.

PEX is known to have a higher expansion rate and has the potential to move quite a bit. “It can be negative,” argues Marshall. “As long as you account for it. There shouldn’t be a problem.” PEX will expand 1.1 inches for every 10-degree rise in temperature in every 100 feet of pipe.

Temperature can also be a limitation for PEX pipe. In most applications, it can handle up to 180 degrees Fahrenheit, which is higher than any typical plumbing or hydronic heating application.

PEX has overcome the majority of the challenges that it faced in the early days, said Marshall. The initial issue was just getting people used to something that wasn’t copper. “When you have a leap in innovation and technology, you always have the early adopters and the late adopters,” he explained. The next issue will be determining what innovation will be next to compete with PEX for the majority in the marketplace.