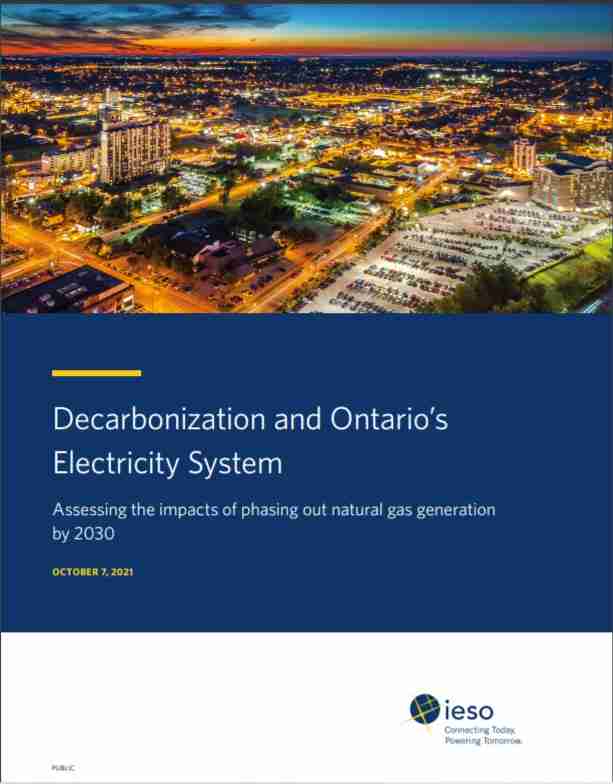 In the study, the IESO looked at the reliability and cost impacts that would be involved if 100 per cent of Ontario’s electricity grid was emissions-free supply mix by 2030. A supply mix is where different types of energy resources complement each other. An example of this would be using natural gas and electricity to heat a home.

The current IESO model would require more than $27 billion to replace gas by 2030 and install new sources of supply and upgrade current infrastructure. According to the report, this would mean a 60 per cent or $100 increase on the average monthly residential bill. “In reality, there are significant practical reasons why it would not be possible to build substantial amounts of new supply and reorient the system to incorporate it by 2030,” per the report.

It would also mean that year-round electricity would be needed from Quebec, which is “unrealistic given that it is reliant on electricity imported from Ontario and other jurisdictions during the winter months,” according to the report. “Electrification of other sectors offers a far more cost-effective pathway to decarbonization than removing natural gas from the grid. Phasing out natural gas generation would bring the cost of carbon reduction in the electricity industry to at least $464 a tonne, a steep price compared to other carbon abatement efforts.”

To prepare for electrification, infrastructure would need to be updated within an eight-year timeframe for things to go along as scheduled. This includes regulatory and environmental approvals; and securing the workers, capital, and resources to do the job. “Even under the most optimistic scenario, the IESO would frequently need to report to emergency actions such as rotating blackouts to manage energy shortfalls.”

The current 2030 goal could lead to negative long-term impacts on cost, reliability, and the advancement of electrification as a whole in Canada, according to the final findings of the report.

As a follow-up to the IESO study, the Atmospheric Fund (TAF) published a response that concluded the report missed the point on gas phaseout. “Canada, the United States, and nearly every other advanced economy has committed to net-zero carbon emissions, which makes the phaseout of natural gas, not a question of if, but how and when,” reports Bryan Purcell, vice president of policy and programs for TAF. “The province’s carbon emissions are quickly heading in the wrong direction, and electricity generation is the fastest-growing source of emissions, increasing 52 per cent since 2017 and forecasted to rise 340 per cent by 2030.”

TAF recommended that the IESO assess the possibility of several phaseout dates with various targets. “Instead, the IESO released a study last week that is leaving many energy experts scratching their heads,” explains Purcell. “They only considered a total gas phaseout by 2030, and completely ignored other possible scenarios, like phasing out most gas by 2030 and completing the phaseout by-or-before 2035.”

The TAF goes on to add that the study failed to consider any reductions in the costs of renewable energy. “Assumptions and data sources are poorly detailed, leaving analysts like us with little to evaluate or interpret. By limiting the scope, the IESO has manufactured a scene of rolling blackouts and skyrocketing electricity rates,” reports Purcell. “Pretending that continuous and indefinite expansion of gas generation is a viable option reveals how short-sighted the IESO is, remaining entrenched in outdated pathways that lead to stranded assets and carbon lock-ins.”

Plumbing & HVAC reached out to IESO for comment following the TAF follow-up. “At its core, the technical assessment shows retiring gas generation in Ontario by 2030 would result in sustained and frequent blackouts as the system would not be able to produce enough electricity to meet demand at all times,” explains Andrew Dow, IESO spokesperson. “However, this assessment is just a first step in our efforts to understand how to best support decarbonization in Ontario’s electricity system.”

They are in the beginning steps of evaluating a moratorium, requested by the Ontario Ministry of Energy, on procuring new natural gas generating stations and developing a pathway to zero emissions in the electricity sector. The report will be complete by fall 2022.

The IESO is working to incorporate greater levels of non-emitting forms of supply in the system, which includes storage and demand response, reports Dow.

Additionally, the organization is evolving the Save on Energy conservation programs to better align with system needs and to help advance local solutions through the Grid Innovation Fund. “Save on Energy conservation programs are far more cost-effective at reducing GHG emissions than phasing out gas generation from Ontario’s electricity grid,” explains Dow. “For commercial and industrial businesses looking to upgrade to more efficient lighting and equipment, reducing carbon emissions will save money.”