If you have to haul your machine up a ladder, a sectional machine makes a lot of sense.

Contractors are generally in one of two camps when it comes to cable type drain cleaning machines – they either prefer drum-type machines or sectional cable machines. Both have been around for a long time and both have strong proponents.

In past articles, the primary focus has been on drum-type machines. In this article, let’s take a good look at sectional machines, including a new cordless model.

Sized for the job

Sectional drain cleaning machines range from small countertop models for cleaning out residential sink and toilet drains to large mainline models. One of the big advantages is that they are relatively compact and light because the technician doesn’t carry the cable with the machine. And they only bring as much cable as needed. That can make life a lot easier if they need to get on to a roof, for example. “Carrying 30 or 35 pounds of machine up a ladder is a lot easier than carrying a 200 lb. machine,” remarked Brendon Goede, product manager of underground technologies, focusing on drain cleaning, for the Ridgid Tool Co., Elyria, Ohio. 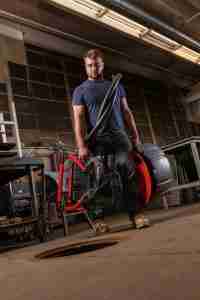 The young guys can still carry everything from the truck in one trip. This is the new Ridgid K-5208 machine and cable carrier.

“Sectional machines are much lighter. Instead of carrying 100 lbs. of cable with the machine, you can carry the machine separately and however many sections of cable you think you will need,” added Marty Silverman, vice president, marketing, for General Pipe Cleaners, McKees Rocks, Pennsylvania.

The advantage of a drum machine is that everything is in one piece, so the technician doesn’t have to make as many trips from the truck, and all the debris is contained within the drum. But the weight is becoming a factor, noted Silverman. “Sectional machines are making a comeback as the workforce is getting older and they don’t want to carry that heavy machine.”

Cables for sectional machines are quite different from those in a drum-type machine. They have a looser/open wind, which means they can get through a four-inch trap easier than an equivalent drum machine cable. They are typically hollow, although General’s sectional cables feature a chain or additional spring inside for reinforcement.

And because of the way they are wound, “the open coils of the sectional machine corkscrew themselves into the line which makes it easier to do longer lines,” noted Silverman.

“Because the cables are not as tightly wound, they grip the roots (on the walls) a lot better compared to drum machines,” added Goede.

Sectional cables are available in lengths from five to 15 feet. “Sectionals are very versatile in that they can get you to what length you need. It’s just that you have to build it to get there,” said Goede. People tend to start with a longer cable, but if the contractor is in a tight space sometimes it’s useful to connect a series of five-foot cables. Couplings are unique to each manufacturer, although adaptors are available to join mismatched cables and machines.

Like a drum machine, the sectional machine drives the cable through a clutch that can run forward or reverse. 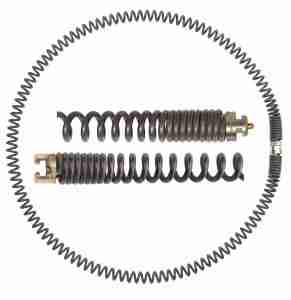 The looser wind of the sectional cables makes them go around bends easier and the cable corkscrews its way down the drain for longer runs.

There are many different augers available for sectional machines depending on the application. They tend to be larger because of the larger cables. Typically, the three that a contractor would use most often would be a straight auger, a flex auger and a bulb auger.

Manufacturers don’t recommend it, but some people buy sectional cables and turn them with an electric drill. “We don’t think that’s safe because the drill can kick back in your arms and smack you in the face,” noted Silverman.

Like any drain cleaning machine, cleaning and oiling sectional cables to prevent rust and odour and wiping down the machine are critical end-of-job steps.

Manufacturers make carriers for the cables that allow easy access for cleaning and oiling. These carriers can be stacked. They typically hold four or five sections. “A guy can take one drum and know he’s good to go for 60 feet with 15-foot sections and, if he needs more, he can always pull more drums,” said Goede. Ridgid carriers have a drain plug that allows cables to be washed while in the carrier. General’s open cage design achieves the same result.

In some situations, the plumber can clean and oil sections as they are pulled from the drain.

Often, they will pressure wash the cables on the shop floor or outside at the job site where possible. The cables tend to be easier to wash than those on a drum machine because of the open winds, noted Silverman.

For the contractor on a tight budget, an old car or truck tire can also work as a carrier, but they are heavy and can be difficult to get water and muck out of.

There are different ways of operating these machines depending on manufacturer, but it’s typically through a lever-operated clutch. In Ridgid’s case, the operator pushes down on the clutch that engages the cable and starts to spin it. “Rather than have a foot pedal you have tactile feedback from your hand on what the cable’s doing. (The operator) will be able to feel the cable bear down as it gets into different obstructions,” said Goede.

The jaws in the clutch assemblies in the machines wear and need to be adjusted and eventually replaced. This isn’t required very often if the machine is used properly, said Silverman. “If you use it well, the same as driving your car without riding the clutch, it will last a long time,” he added.

Manufacturers put considerable thought into field servicing so that a contractor doesn’t go down on the job. Ridgid’s new K-5208 sectional machine, for example, has a knob in the bottom for toolless field adjustment of the clutch. And if the clutch goes completely, “it’s a quick change in the field. You take two screws out to pop the cover off and change the clutch,” said Goede. Having a spare clutch in the truck is not a bad idea, he added.

General’s Root 66 machine has grease fittings to grease the jaws that grip the cable, so a shot with a grease gun every now and again will keep the machine operating smoothly.

In June every year, Milwaukee Tools brings media, dealers and contractors from all over the world to their headquarters in Milwaukee, Wisconsin for the company’s New Product Symposium. While it’s no secret that Milwaukee has its eye on the drain cleaning sector, this year trade journalists covering plumbing saw something unexpected.

The machine can clear lines up to 200 feet with 7/8” standard or 1-1/4” heavy-duty sectional cables, reported Milwaukee product manager Kathleen Keegan. Another unique feature is the machine’s auto-feed and retract cable drive. “Two hundred feet of cable is heavy,” she added. 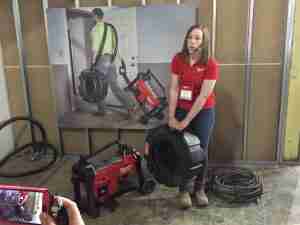 Milwaukee is a recent entrant into the drain cleaning industry, introducing a small cordless drum-type drain cleaner in 2017.

“This is just the beginning for us, said Keegan. “We are going to continue to expand our line of drain cleaning equipment.”

Sectional machines offer many good features, but would they be a good first machine for someone just getting into drain cleaning, or would a drum-type machine be a better way to go?

“It really depends on the application,” remarked Goede. “The first question is always what type of industry are you going to get into?” In residential, a lot of people start out with the Ridgid K-50 machine, which is a drum-type machine that can also use sectional cables.

If the contractor is primarily doing residential and smaller jobs, a machine like the new General Root 66 is a good option.

“I always think that sectional machines do a better job,” said Silverman. “They are spinning at a higher RPM, they are lighter, and you can go longer distances so, if you don’t have an allegiance to one or the other, I like the sectional machines. Drum type machines are still the more popular category in the industry, but I think sectional does a better job.”