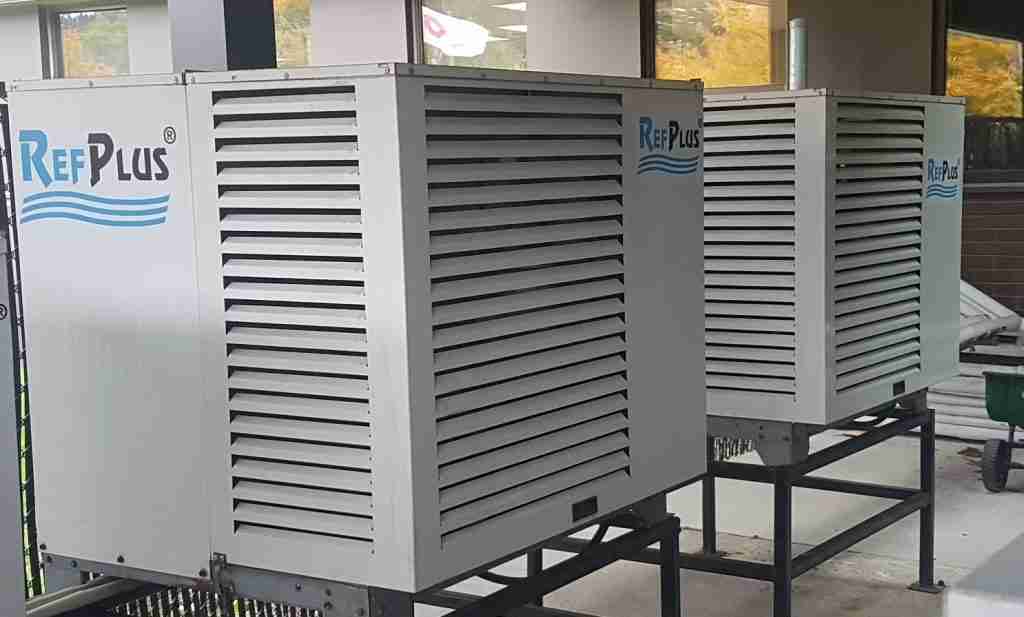 These outdoor condensing units are at ground level and protected from vandalism by a fence.

One of the questions that comes up from time to time is what to choose as the design ambient temperature when you are sizing a condensing unit. Essentially, there are two things to consider:

What is the maximum temperature of air I am rejecting heat into?

How much warmer do I want my refrigerant to be compared to that air to reject heat?

If you are working with an air-cooled condensing unit that comes with both a compressor and a condenser, someone has already made the decision on the second question for you. While it can be a pain to determine exactly what they decided, you can figure is out by looking at the compressor model and capacities if you are so inclined. Let’s look closer at the first question: When you look into the catalogue at information, similar to that shown in Table 1, to pick a unit, what ambient temperature are you going to use to determine the unit’s capacity?

In HVAC it is very common to use something called the 0.4, one, and two per cent cooling dry bulb design conditions to determine the heat gain for a building and the operating parameters of its air conditioning system. These design conditions mean that for that particular percentage of the hours in a year the temperature is above the published value. Table 2 shows an example of this information for Edmonton, Alta. As you can see, in an average year the temperature in Edmonton is above 82.6F for 0.4 per cent of the time; in case you are wondering, that is about 35 hours.

The same ASHRAE data we already referenced above also includes the annual mean with the standard deviation as well as the five, 10, 20, and 50-year extreme temperatures. An example of this information is in Table 3 and it shows that the “average” extreme temperature is 88.6F, but that it varies from year to year. There are a lot of complicated statistics involved in these numbers but basically the probability, based on historical weather data, of the maximum annual temperature observed in Edmonton being 98.2F or higher is two per cent.

If you were going to design for the absolute hottest year, you might choose a 98F ambient design condition. 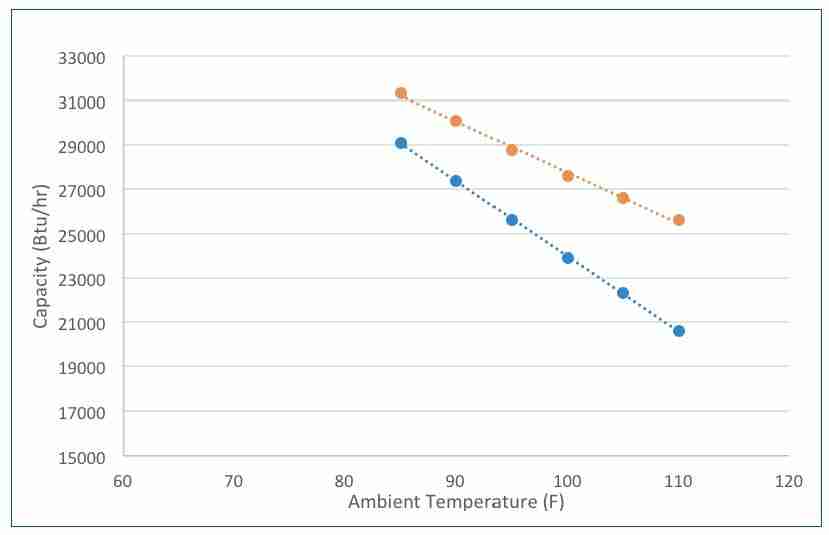 2. What effect would this higher refrigeration system?

3. How critical is it that my refrigeration system deliver exactly the design load?

The way to understand how much effect this will have on the refrigerated space is to understand the load. Imagine that we have a walk-in box that is 25 ft x 30 ft x 10 ft that has 6,000 pounds of product in it and has a peak load of 29,500 Btu/hr. Then, let’s say that we chose ambient design temperature of 85F, which is above the 0.4 per cent design temperature but less than the average annual extreme. Both condensing units shown in Figure 1 would be acceptable selections. However, when the outdoor temperature reaches 95F, the reciprocating unit will be 3,900 Btu/hr undersized and the scroll condensing unit would be 700 Btu/hr undersized.

We don’t have time to go through the math here, but in the case of the reciprocating compressor this missing capacity would result in the product increasing about 1F per hour providing the box was actually experiencing the peak load. This may not be serious, but if the 95F ambient conditions happened for several hours in a row it could definitely become a serious concern. The scroll condensing performs better in this case, with a product temperature rise of about 0.2F per hour because it has a higher capacity to begin with and the capacity doesn’t decrease as quickly at higher ambient temperatures.

Whether either of these results is acceptable depends a lot on the specifics of the design. In a large box with a lot of product, it is normal to use that product to “flywheel” you through a period of above design conditions. In a cooler or freezer with a low product mass, like a blood sample cooler, the air temperature will rise quickly, and you need to be extremely careful. 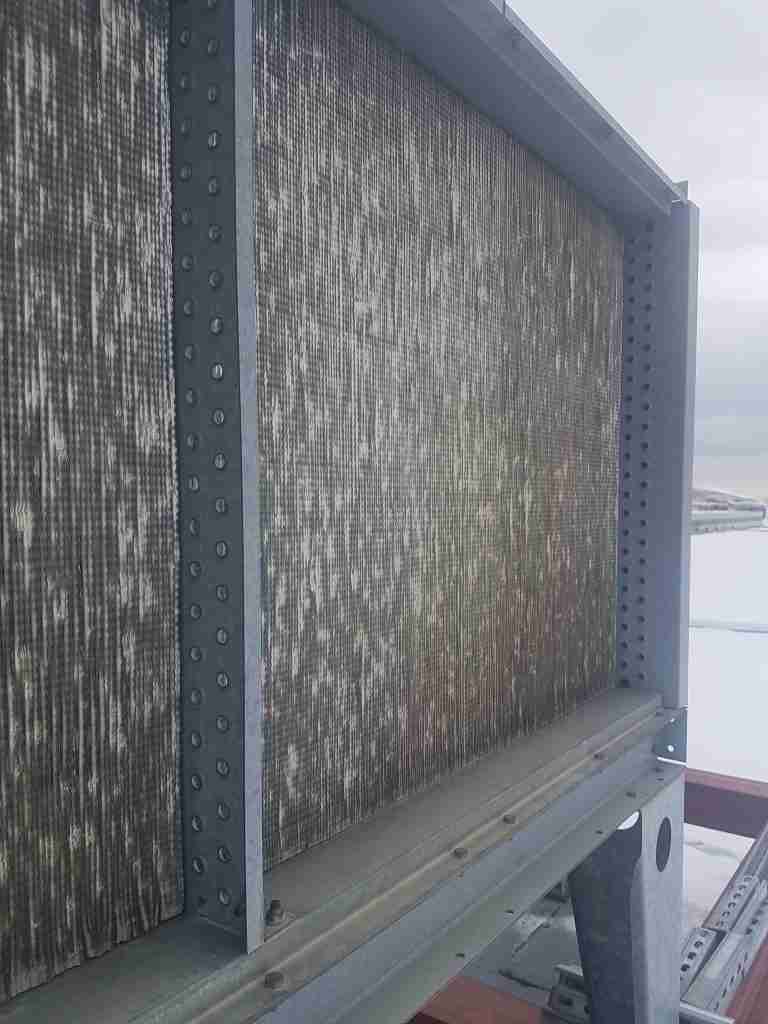 This rooftop condensing unit, nearing the end of its lifespan, shows the telltale signs of hail damage, and is obviously operating with some fouling.

4. Does the refrigeration design need to consider condenser fouling?

All heat transfer surfaces foul over time. In an air-cooled condenser, a film of oil and other crud can develop on the inside of the tubing and dust, dirt, grease, and other contaminants can build up on the outside of the coil to impede heat transfer. On top of these contaminants, fins on air cooled condensers can be easily bent. Speaking very generally, a well-maintained condenser should not have that much permanent fouling (i.e. fouling that cannot be repaired). However, there will be some amount and it is typical to make a small allowance for condenser fouling by adding 1-2F to the design ambient conditions. Of course, if a condenser is going to be put in a location that is dusty or dirty and you know it won’t be cleaned frequently enough or in a location prone to hail, you may want to make a much larger allowance to make sure the system keeps operating properly.

The final piece of the puzzle depends on the expected lifespan of the equipment. We are continuously seeing warming weather and higher extreme temperatures and the longer the equipment is expected to operate, the more consideration should be given to adding a safety factor to account for climate change.

In the next issue, we will wrap up the discussion on outdoor units and explore how to design ventilation for indoor condensing units.