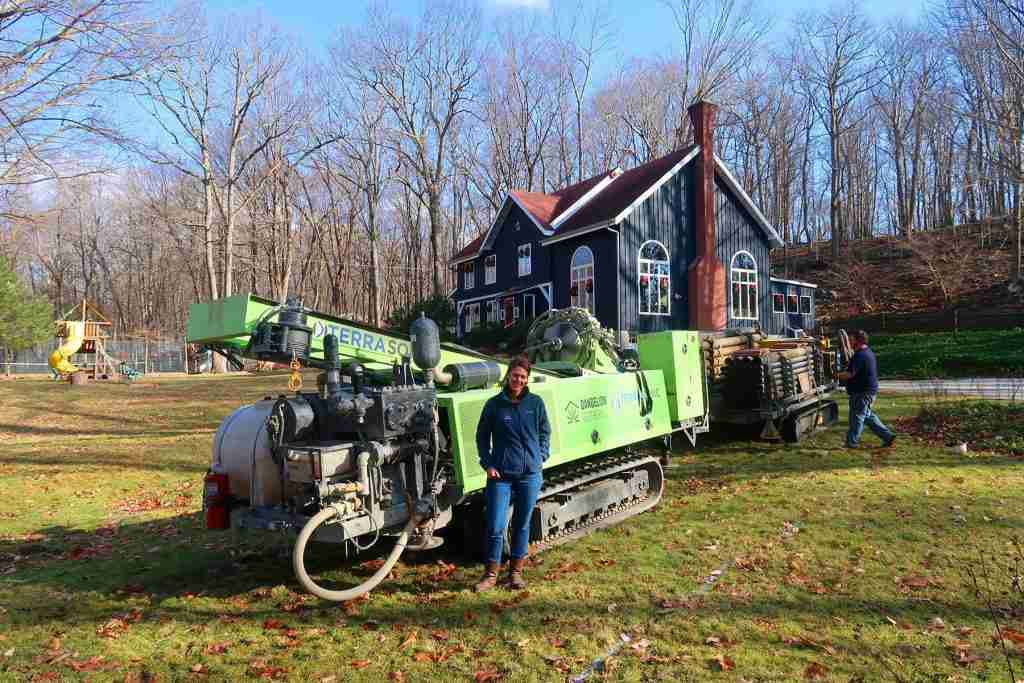 Karen Acker, geologist for Dandelion Energy in Westchester County, New York, showcases one of the sites the company has retrofitted.

Since COVID-19 began dominating every headline, online speculation has been robust with some promoting a “green recovery,” and others implying we should delay clean energy plans further. Which way will we go? Some cities seem to be pushing ahead with green programs.

Vancouver will require zero-emission space and water heating for all residential buildings three storeys and under as of Jan. 1, 2022. That’s only about 18 months from now. Other cities like Toronto, Montreal and New York still seem to be moving in similar directions. We may continue to see fast growth for mini-splits, VRFs, chilled beams, ERVs, heat pump water heaters, and ground source heat pumps.

One of the untold stories is that ground source systems in single-family homes in Ontario’s countryside may be more numerous than previously known. If governments continue to phase out fossil fuels, ground source technology might emerge as a useful retrofit solution.

In the past 27 years, John Bosman, CEO of Bostech Mechanical, Listowel, Ont., has installed hundreds of ground source heat pumps in the Stratford area in southwestern Ontario.

“Some years we were doing as many as 130 systems,” he reported. “The environmental benefits are clear. You’re just transferring heat from the ground into the building. There’s no flame and no chimney. You’re not burning anything. When you’re cooling you can reject heat into the ground more efficiently than into hot air. There are significant energy savings.” 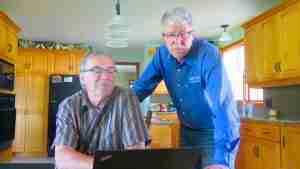 Gerald Seyler in Gads Hill, Ont., one of Bostech’s happy customers, is an IT professional who shows us detailed spreadsheets that track energy usage over the years.

First, he tried air source systems, then in 1993 he had Bosman connect a ClimateMaster ground source pump to a conventional 213-foot-deep potable water well. It provided 100 per cent of heating and cooling for an 1,800 square foot home. “I was saving about 65 per cent every year,” says Seyler. “We were very satisfied with geothermal, so in 2009 we decided to go further.”

The family added a 900-foot trench containing an 1,800-foot ground source loop. Recently, after 25 years with the original heat pump, they opted for a two-stage GeoSmart unit, made in Cambridge, Ont., with a high efficiency variable speed ECM powered system that uses R410A refrigerant. Seyler’s spreadsheets indicates the new pump is about 20 per cent more efficient than the previous one. “It’s great because while you’re cooling your house, you’re also making hot water.”

In the Kingston, Cornwall, Ottawa area, Atel Air, Williamsburg, Ont., has been installing geothermal systems since 1984. A few years ago, the company installed 10 ground source heat pumps at the historic Upper Canada Village in Morrisburg; but most projects have been country houses. 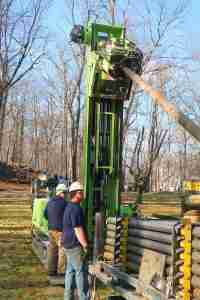 Workers drill boreholes at one of the Dandelion projects.

Jimi Thom manages Atel and met us at the home of Dr. Gerry Rosenquist, who told us how he began practicing medicine in the area so long ago that he delivered babies by gaslight and was paid with $5 bills with a picture of King George VI on them. (Pulling your leg perhaps, Bruce? Ed)

But the good doctor has always been a progressive thinker and his children are as well. When the time came for Rosenquist and his wife to move out of downtown Morrisburg, everyone voted for clean systems in a new waterfront home in Iroquois, Ont., on the St. Lawrence River. The 4,000 square foot home received a closed loop system with 3,000 feet of pipe laid out in a five-foot deep trench. “It’s swampy down here. Lots of thermal energy,” says Rosenquist. “Geothermal is healthier for the family in the house and it’s healthier for our environment too. We have to preserve natural surroundings and stop contaminating the air that we breathe.”

Today’s doctors are comfortable, but Thom says average earners can also now afford geothermal. “I have a snap financial app on my iPad. I just upload the buyer’s driver licence and bang, they’re approved.” He makes it sound easy, but high loan rates and up-front costs continue to frighten would be buyers.

The Ontario Geothermal Association (OGA), a partner with the Heating, Refrigeration, and Air Conditioning Institute of Canada (HRAI), has now posted on its website a dozen customer stories like these, and is pushing them out through social media. They want to dispel myths and increase awareness. Despite thousands of trouble-free systems around the province, if a policy planner looks on Google for more information on ground source, they usually find a Globe and Mail story that focuses on an incorrectly installed system. But the industry is beginning to win, and HRAI vice president Martin Luymes says recent meetings with governments have been extremely positive.

The really big story is not about single-family homes but commercial, multi-family, and affordable housing ground source projects popping up all over North America. In downtown Toronto near Yonge and Eglinton, Lillian Park, a new two-tower 564-unit, residential project has now been completed. 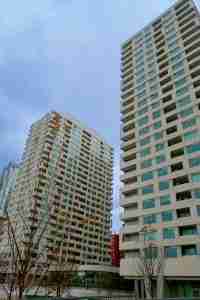 In downtown Toronto, the Lillian Park project, which features two towers and 564 residential units, has now been completed.

There were only tiny slips of land available for some 120 boreholes at 600 feet deep. GeoSource Energy Inc., Caledonia, Ont., used the latest drill rigs, equipped with sophisticated satellite capability, allowing them to angle under the buildings and increase the space between each borehole as they went down. The resulting system is operated and maintained by Diverso Energy, Waterloo, Ont., a third party. It handles 100 per cent of the heating and cooling for the 500,000-plus square foot complex, plus the entire load of a neighbouring seniors home owned by the same client.

Needless to say, developers and municipal governments are interested in projects like these. The OGA was organizing its April conference to focus on municipal planners and urban developers, until COVID-19 caused it to be delayed until next year.

Many of the aforementioned single-family systems in Ontario were sold with the help of government incentives that have since been cancelled, but some new programs are in the offing. The federal government has provided more than $1 billion to the Federation of Canadian Municipalities for its Green Municipal Fund and is strongly recommending property assessed clean energy (PACE) loan programs, that are working well in hundreds of cities around North America.

Municipalities were asked to apply this spring and the suggestion from the fund directors is that the goal is to provide low interest loans for costly homeowner projects like geothermal and solar. The loans will be repaid via property tax bills, backstopped by government, and secured on the titles. In this way, the utility savings cover most or all of the up-front costs, eliminating a key barrier to geothermal. 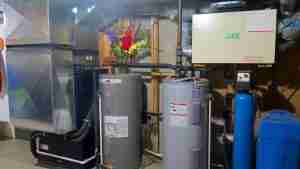 A tidy geothermal installation in the Seyler home.

Google’s Dandelion Energy project in Peekskill, New York which raised millions of dollars in capital, hired a sophisticated sales team, and went “all in” to sell ground source retrofits in the region. After a year of success, we were invited in January to review two operations in Westchester, N.Y. These inlcuded drilling at one location and a heat pump installation at another. Dandelion’s geologist Karen Acker said that some 350 retrofits have already been completed in the state.

Quebec, the Atlantic provinces, Massachusetts, Maine, New Jersey and other states and provinces, especially in the northeast, are establishing or bringing back serious programs to support ground source systems. If they hold firm to their commitments, we may eventually see something of a “green recovery” from this pandemic, with ground source as part of the plan.