In recent years the trade van market has changed dramatically with the introduction of European style cargo vans in both full-sized and compact models.

Today there are a myriad of models with multiple wheelbases and styles to choose from. And while there are no significant new models for 2017, manufacturers continue to upgrade and offer more options to their existing models. And then there’s an interesting concept vehicle from Toyota, but more on that later.

The Euro-style Ford Transit is proving a worthy replacement for the E-Series.

Ford introduced its European style full-sized Transit work van in 2014. Built at the company’s Kansas City plant, over 100,000 are sold each year. It returns for 2017 in 64 different configurations, up from 58 in 2016. These include two wheelbases and three roof heights and include both standard cargo vans and cab/chassis units, allowing the contractor significant flexibility in having the van tailored to their needs.

One new configuration should appeal to contractors that need to carry a lot of weight – metal pipe and fittings, threading machines, etc. The heavy-duty Transit 350 is now available in a regular wheelbase version – with single rear wheels and a 9,500 lb. GVWR.

New heated seats in cloth or leather should appeal to contractors in colder regions. And for a touch of style, easy-to-clean aluminum wheels are now available.

Reverse sensing, automatic headlamps, roof rails and a six-way power drivers seat are now standard for Titanium and XLT trim levels.
The long-lived Ford E-Series (Econoline) van lives on in stripped chassis and cutaway version for contractors that need a cube van. The main upgrade for 2017 is the availability of the 6.2-litre V-8 engine from the Ford F-Series Super Duty trucks. 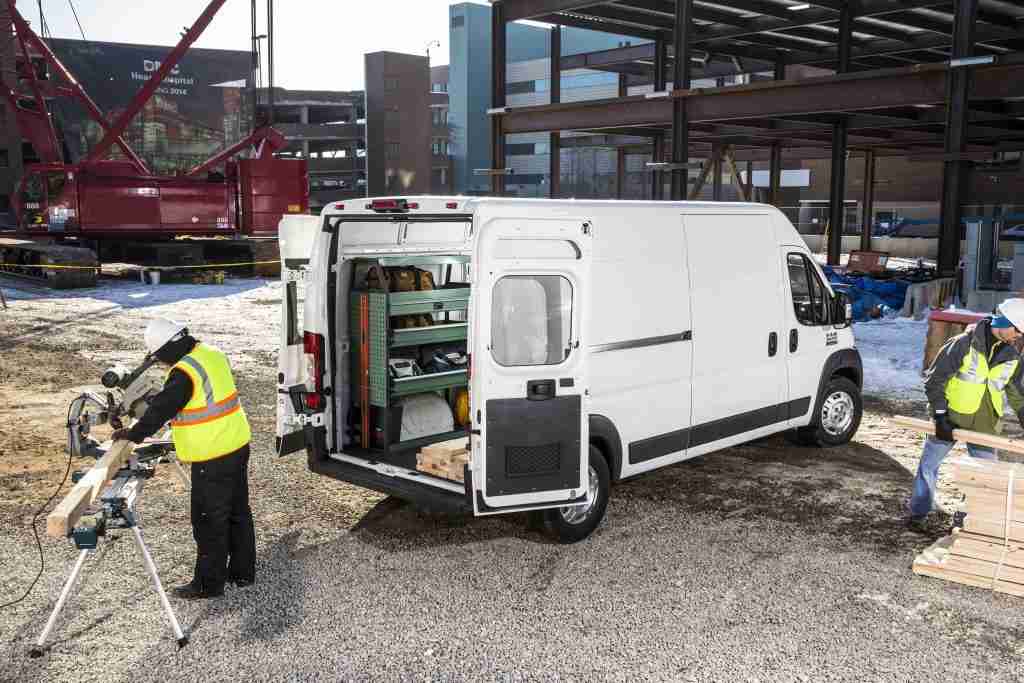 The Ram Commercial ProMaster from Fiat Chrysler Amercia (FCA) is unique among full-sized vans as the only front-wheel-drive model. This has a number of advantages, not least of which is a lower floor height that makes loading and unloading heavy equipment and supplies easier. Vertical sidewalls make the ProMaster easy to upfit. Front-wheel-drive also offers better traction in some conditions and a tighter turning radius.

It is available in 118, 136 and 159-inch wheelbases, low and high roof versions and four body lengths, as well as a cab/chassis/cutaway version. Engine choices consist of the 3.6 litre Pentastar V-6 coupled to a six-speed automatic transmission or the 3.0 litre four-cylinder EcoDiesel I-4 engine with an “electronically controlled Dual Active Drive six-speed automated manual” transmission.

For 2017, the electronic parking brake is standard on diesel models and all models are now available with Uconnect 3.0 electronic communications and entertainment system.

Compact vans like the Ram Promaster City make a lot of sense when the work involves underground parking garages.

A Chrysler 2.4-litre Tigershark four cylinder engine is mated to a nine-speed automatic transmission to achieve 29 miles per gallon (12.3km/litre) on the highway and 21 mpg (8.9 km/litre) around town.
Payload is 1,883 lbs. with a cargo volume of 131.7 sq. ft. A cargo floor length of 87.2” is just a little too short to lay a sheet of plywood flat. Vertical sides help the installation of shelving, but sliding doors on both sides will prove a hindrance. Rear barn style doors are split 60/40.

Mercedes-Benz Canada made a big splash last year with the introduction of its mid-sized Metris model. Roughly the same size as the much-missed GM Safari and Astro vans, it filled a major hole in the market.

The Metris is back for 2017 with a number of upgrades including alloy wheels, blind spot assist as a stand-alone option, upgraded mirrors, and a number of new accessories, including a five-piece chrome grill for contractors seeking a sharp looking van.

The Metris features traditional barn style rear doors and a sliding door on the passenger side. Of course, it also features all the electronics that have become standard on today’s vans.

The Mercedes-Benz Sprinter full-sized van is back for 2017 with minor upgrades including an improved rearview camera that offers a greater viewing angle and width.

Nissan is a relatively new player in the cargo van market but its NV 1500, 2500, and 3500 full-sized vans and its small NV200 van have become common sights on Canadian job sites. They’ve changed little since their introduction and both models will continue into 2017 unchanged.

The large NV rear-wheel-drive cargo vans are offered with either a 261 hp 4.0 litre V-6 or a 317 hp V-8, both operating through a five-speed automatic transmission. Rear doors are split 50/50 and open 243 degrees for easy loading. There are numerous interior and exterior mounting points to make upfitting easy. Standard and high roof versions are available.

The compact NV 200 cargo van offers 122 sq. ft. of cargo space and a payload of 1,500 lbs. A two-litre 131 hp four-cylinder engine drives the front wheels through a continuously variable transmission.

The cargo area offers 6’10” from the rear door to the seats and 4’6” between sidewalls. Rear doors are split 40/60 with the larger door on the curb side. Both open 90 and 180 degrees. There are sliding doors on both sides.

The NV200 is also sold through GM dealers as the Chevrolet City Express.

Despite the proliferation of Euro-style vans, a visit to any job site shows that contractors still have a high comfort level with the traditional cargo van. General Motors will continue to offer its long running Chevrolet Express and GMC Savana for 2017.

They are available in standard and long wheelbase versions. The standard engine is a 4.8 litre V-8, with an optional six-litre version. Also available is the 6.6-litre turbo diesel. All operate through a six-speed automatic transmission. A locking differential is also available.
The Chevrolet (Nissan) City Express is also back for 2017.

Toyota has been showing its compact urban utility concept (U2) vehicle at auto shows. It might work for a service tech or supervisor in a busy urban area.

A teaser from Toyota

Toyota showed Urban Utility Concept (U2) vehicle at the Canadian International Auto Show in Toronto back in February. Aimed at the “maker” market (people who build stuff), the U2 is the size of a compact car but designed with the functionality of a small truck, with an open cargo space and removable front seat, a tailgate that folds down into a ramp and roof panels that retract (to carry tall objects).

There is no indication yet whether Toyota plans to put this into production, but it may offer another option for contractors that need a small van to cope with busy city traffic.

P&HVAC also contacted Volkswagen Canada for this article. The company offers several trade van models in other countries. However, at this point, it is not offering them in the U.S. or Canada, reported Thomas Tetzlaff, VW Canada manager of media relations. That could change.

The increasingly crowded and competitive van market can’t help but put contractors in the drivers’ seat when it comes to negotiating the best deal at their local dealership.