Innovation is ongoing and constant in the residential faucet industry as manufacturers work to balance code mandated water conservation requirements while ensuring that flow from lavatory and kitchen faucets along with showerheads doesn’t feel inadequate to the user.

Current plumbing codes in Canada differ based on where the faucet is installed, as per the National Plumbing Code (NPC) and provincial building codes.

Lavatory and kitchen faucets are allowed a maximum flow of 8.3 litres per minute – LPN (2.2 gallons per minute or GPM), while shower heads are allowed 9.5 LPM (2.5 GPM). However, rather than making different Faucets and Fixtures today’s residential faucets manufacturers balance conservation, comfort and convenience Riobel builds all its lavatory faucets to the EPA WaterSense standard. products for every market, most companies use the California maximum flow rates because they are the most restrictive. “We look at what the leading geographies are and say, ‘if California, for example, had a lower flow rate than other regions we may follow the lead and do the same thing,’” said Garry Scott, vice president of marketing and e-commerce for Moen Canada, Oakville, Ont. 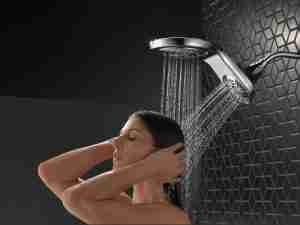 Most manufacturers follow the guidelines set out in the U.S. EPA WaterSense water conservation program, a program that U.S. president Donald Trump has promised to cut but which so far has survived with considerable support from the industry.

For example, Riobel, St-Jérôme, Que., designs their lavatory faucets to meet WaterSense requirements. Products bearing the WaterSense label are required to follow a set of guidelines, which include being 20 per cent more water efficient than average products and provide measurable water savings.

To meet these requirements, Riobel lavatory faucets flow 5.7 LPM, reported Frederic Brousseau, development coordinator. Like many other lavatory faucets on the market, Riobel uses regulators and aerators to slow down the flow rates.

This isn’t possible with the larger showers, but they still must meet NPC flow requirements. “If you take a big shower head like 20 inches, for that kind of shower head we can’t put a flow rate at 7.6 because we don’t have enough water, so we keep it at 9.5 litres per minute,” said Brousseau.

Riobel will launch a new collection of lavatory faucets in September, while a kitchen faucet collection will be released next January. 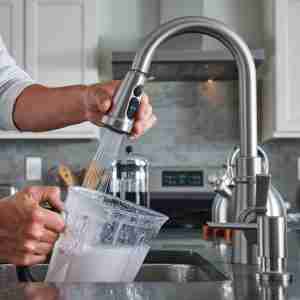 This fall, Delta Faucet (Masco Canada), Mississauga, Ont., will launch its HydroRain H2Okinetic two-in-one shower head. The shower head will allow users to choose between using the shower head, rain can or both at the same time. The new shower head will maintain a water flow rate of 6.6 LPM (1.75 GPM).

In the kitchen, flow rates have been decreasing over the years, but still need to have a higher flow rate than lavatory faucets based on the nature of their use, noted Stan Speerstra, vice president of product development.

“Some of our kitchen faucets offer our Multi-Flow technology, which allows users to switch between 1.5 GPM and 2 GPM, so they can choose when they need the extra boost of water and when they don’t. Pot fillers, on the other hand, are designed to quickly and conveniently fill large pots at the stove and have an average flow rate of four GPM,” he added.

Delta Faucet has received considerable attention from the EPA for its water saving designs. In 2017 the company was named the WaterSense Partner of the Year and was also the WaterSense Sustained Excellence Award Winner.

As mentioned, it can be difficult to conserve water in the kitchen. However, new faucet designs from Moen are designed to do just that, incorporating the company’s Power Clean and Power Boost technologies.

“One of the things we find when we talk to consumers is they are looking for convenience in their home and, as well, they are interested in saving water. One of the things that we do at Moen is to bring both of those together,” said Scott.

In pull-out and pull-down faucets, the user triggers a switch that shifts the faucet to Power Clean mode, providing 50 percent more water pressure but the same flow. This allows the user to clean up a kitchen sink, for example, more quickly.

Power Boost is similar, but also increases water flow by 50 percent. This allows certain jobs within the kitchen, like filling a pot, to be completed at a faster rate. “The benefit here is you will fill up the pot faster than having to wait for the regular flow rate to do that job,” said Scott. “The second benefit to it, when it comes to cleaning, is that you are getting 50 per cent more spray force … allowing you to clean your dishes faster, fill pots faster, and enjoy more convenience in the kitchen.”

Meanwhile, in the shower, Moen’s immersion technology distributes the water evenly across the shower head so the nozzle at the top or the side will give the user the same amount of pressure.

“Immersion technology with the water saving mode will allow you to use 30 per cent less water, but it’ll feel like you are using a shower that uses a regular shower rate,” said Scott.

Half the max flow rate

As a company, American Standard (Lixil Canada), Mississauga, Ont., follows the California flow rates. All lavatory faucets flow 4.5 LPM (1.2 GPM), or about half the allowable rate.

“For us to have the same faucet offered at two different flow rates (would be) just cost prohibitive, which is why we decided to go with the 1.2 across North America,” said Maria Bosco, director of product marketing.

It also helps in regions facing water shortages. “In B.C., they recently had water shortages, not as severe as California, but they too have started to be more concerned with water conservation. By having lavatory faucets that deliver 1.2 gallons/min we are servicing that B.C. market, but overall as a whole the industry is moving in that direction,” said Bosco.

Plumbers can bring the water flow rate even lower if needed. “We have kits that allow the faucet to go down to 0.35 gallons per minute. You have a restrictor that needs to be installed on the hot and cold supply lines and then you also have restrictor at the mouth of the faucet. You need the restrictors at the inlet in case there are any variants in the hot and cold water, so say the water is being drawn elsewhere in the home and you get a shortage of cold water, you’re not going to get scalded,” she said.

Water efficiency is now part of the National Plumbing Code

American Standard kitchen faucets remain at 1.5 gallons per minute because of consumers’ desire to still clean their dishes forcefully, while still using less water. “We’re finding that we can’t really go any lower, otherwise you won’t have enough pressure for the toggle function and to divert the spray pattern,” she said.

There are two other features that are offered with Lixil’s Grohe faucets that still allow consumers to conserve water. They have developed two different stops that will either limit the flow or temperature.