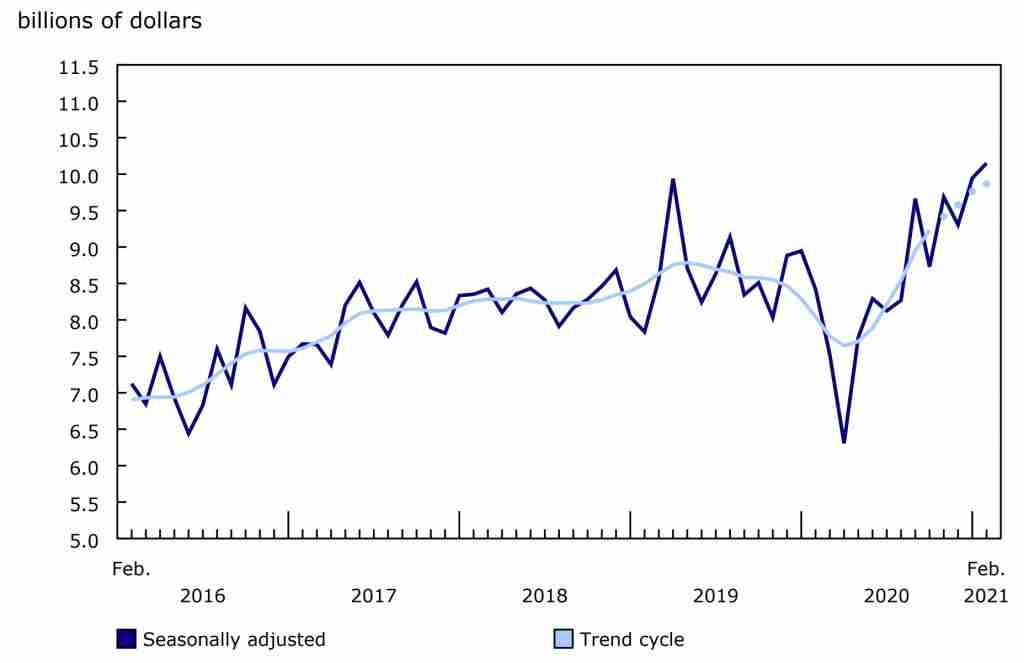 The total value of building permits. Table by Statistics Canada.

Ottawa, ON—A jump in the number of non-residential building permits issued in February helped break the $10 billion mark for the first time. This more than offset the decline in the residential sector reports Statistics Canada.
The non-residential—commercial, institutional, and industrial—jumped 14.2 per cent to $3.3 billion with all three components posting gains. Although the industry reported a larger jump, the level still remained around 13 per cent below the peak reached in April 2019.
Institutional permits saw their largest value increase since June 2020, as the total for this component reach $1 billion. With several permits issued for long-term care facilities, Ontario and Alberta led the way—a 44.4 per cent increase for Ontario and a 107.6 per cent increase for Alberta.
The commercial industry rose to $1.7 billion, the highest value since September 2020. Most of the gain was the result of high-value permits issued for additions/renovations to commercial buildings in Ontario and Alberta. Building intentions in the commercial component have not been this high in Alberta since December 2019.
Municipalities issued permits worth $544 million for industrial buildings in February, up 1.9 per cent from the previous month. Seven provinces recorded a rise in the industrial sector, led by Ontario.

Residential construction intentions decreased 2.9 per cent to $6.8 billion in February, following a record month.
In British Columbia, several higher value permits were issued for multi-family dwellings—including two for the University District condo development in Surrey.
Declines in six provinces, including Ontario and Alberta, influenced the national levels’ overall decline for this sector.
Building permits for single-family homes dipped one per cent to $3.5 billion, although they remained at historically high levels, reports Statistics Canada. Ontario (up $1.5 billion) and Prince Edward Island (up $29.1 million) reported record highs. This marks the third consecutive month of record-setting numbers for Ontario, while the building permits in Prince Edward Island were close to double the values typically observed prior to the pandemic.
From January 2018 to the end of 2020, the value for multi-family dwellings had exceeded that of single-family homes. However, shortly after the start of the pandemic, the gap between these two components steadily closed. By January 2021, the value of permits for single-family homes surpassed multi-family dwellings and this trend continued into February.