You are at:Home»News»Vancouver Island construction industry hit hard by pandemic 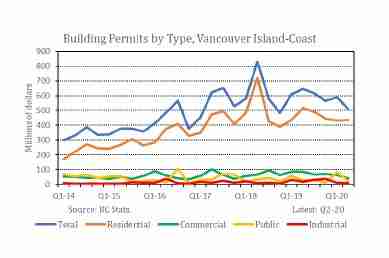 Victoria, B.C. — The construction industry in the Vancouver Island area has been hit hard in the second quarter of 2020 due to the COVID-19 pandemic. In a normal year, building permits are usually on the rise in the second quarter of the year on the seasonal increase in residential activity but total building permits issued Island-wide have decreased 14 per cent to $506.6 million compared to the first quarter, reports Vancouver Island Construction Association.

There was a sharp drop in February follows by slowly improving permit activity. June saw a surge due to the accumulated demand backlog.

Total investment spending decreased in non-residential building construction investment for the Victoria CMA. It decreased 4.8 per cent during May from the prior month due mainly to an 8.2 per cent decline in commercial buildings. Compared to the first five months of last year, total spending was 18.9 per cent lower while institutional and government activity was down 45.4 per cent.

Total residential investment spending rebounded strongly during May over the prior month’s COID-19 contraction. Spending on single-family dwellings saw the larger rebound in May following April’s sharp and sudden plunge.