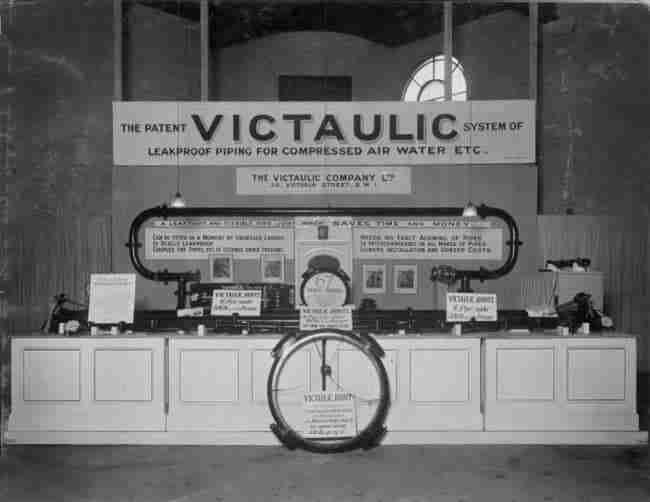 One hundred years is a long time in any business. For Victaulic, born from the dark depths of the First World War when a method was needed to quickly and quietly lay pipe across the trenches of WWI battlefields, 2019 marks a century of innovative pipe joining systems – every bit as valid in industrial, commercial and institutional (ICI) construction today is it was in those early days.

British Lieutenant Ernest Tribe is credited with inventing the mechanical coupling. This ‘invasion piping’ became known as ‘Victory’ piping. On April 4, 2019, Tribe filed a patent on the coupling. Later in the year, Tribe and other investors formed The Victory Pipe Joint Co. in London. ‘Victory’ was combined with ‘hydraulic’ and Victaulic was born.

Victaulic came to Canada in 1931, occupying a small warehouse on Bay Street in Toronto, now the heart of the financial district, reported Tim Meadows, Victaulic Canada vice president and general manager. A 32-year veteran, Meadows has been around for about a third of the company’s history and has seen significant growth.

Today the company has just under 400 employees in Canada, “so it’s moved along quite a ways from 1931 when I believe we might have had four,” he laughed. It has facilities in Vancouver, Edmonton, Sudbury, Ont., Toronto and Montreal.

“I think what drives Victaulic is innovation,” said Meadows. “The mantra that we operate under is the conversion of the marketplace to our concept – the grooved mechanical joint… it’s been our rallying cry now for 100 years.” The company currently has over 2,000 patents worldwide.

“Our next 100 years will include more customer-centric innovation as technology grows more rapidly than ever before and we continue to make strategic R&D investments,” said Victaulic chairman, president and CEO John F. Malloy.

“Our product has become much more effective and more of an opportunity for owners and engineers to select in the last 20 or 30 years than it was in the first 70 years.”

Quick assembly, safety issues that restrict on-site welding and the number of days available to get construction done have proven beneficial for Victaulic. “That’s ultimately what constructors struggle with the most today,” he added.

Victaulic offers help with design, training and certification for workers, inspection services and many other things that allow it to offer extended warranties. “Our quality, reliability, our innovation, our ease of construction all feed into today’s construction environment where all those are factors,” said Meadows.

In Canada, the Victaulic system was first adopted by the mining industry. In 1965 it earned it’s Factory Mutual approval for fire protection. From there, it expanded into commercial heating and cooling, then into water and wastewater infrastructure. “Part of our strength is the diversity of markets that we participate in,” remarked Meadows.

The company is doing a number of things to celebrate 100 years. It held a barbecue on the anniversary of April 4 and the second one in June when the weather improved. “We’re trying to keep it alive every month, doing something different,” said Meadows.

“We’re very proud of our heritage and our employees and we’re very happy to be able to celebrate 100 years. It doesn’t happen often that companies last this long.”