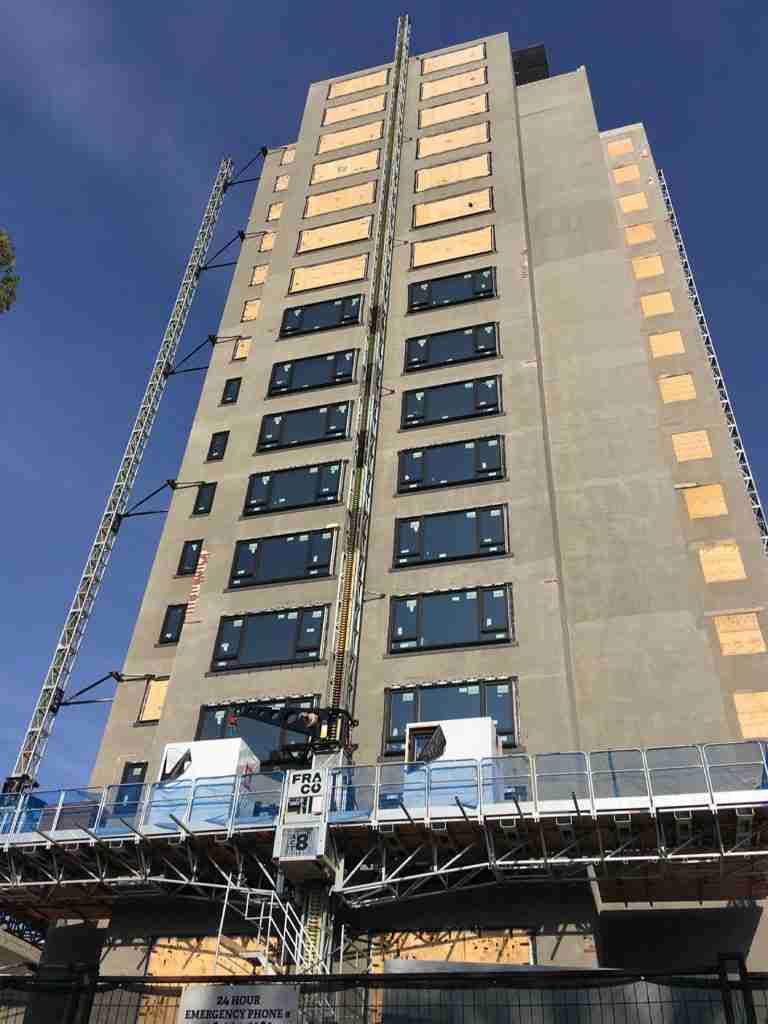 The retrofit of a Hamilton high-rise generates valuable lessons

An elderly couple orders breakfast at a restaurant and soon after their meals arrive the server notices that the man hasn’t touched his food. “Is everything alright?” the server asks. “Oh yes,” replies the man, “I’m just waiting for the teeth.”

While most of us wouldn’t think of sharing one set of dentures, this amusing anecdote reminds us that we live in a time when smart re-use and recycling choices can be good for the planet and for the pocketbook.

It’s a message, that sadly, has yet to sink in. According to the World Bank, more than two billion tons of trash ends up in landfills each year. The World Economic Forum reports that 32 per cent of the 78 million tons of plastic packaging produced each year ends up in the ocean. And just 14 per cent of global plastic is collected for recycling, with even less actually reused.

When it comes to the Canadian construction industry, we’ve come a long way over the past 10 years, but new construction currently diverts just five to 15 per cent of concrete, wood, asphalt and other materials. While demolition and renovation operations run at closer to 50 per cent, there is still much room for improvement.

It’s one reason various levels of governments across Canada are paying close attention to the City of Hamilton’s Ken Soble Tower project. Once completed, it will qualify as one of only 10 Passive House (PH) high-rise retrofits registered with the International PH Certification in the world—and the first in North America. 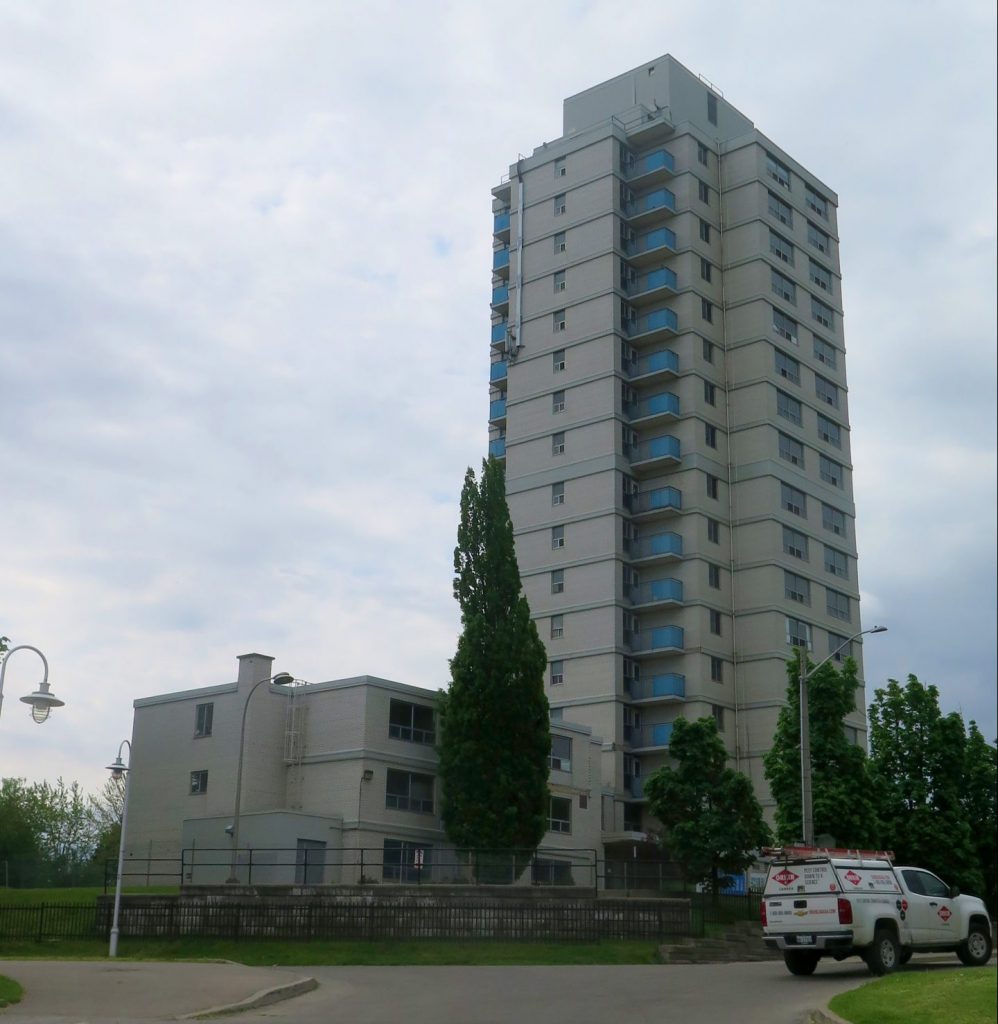 Built in 1967, the Ken Soble Tower, like many buildings in North America was crumbling. Too valuable to demolish, a passive house retrofit providing a model for its regeneration.

Built in 1967, the city-owned 18-storey building at 500 MacNab Street was like thousands of other buildings in North America, crumbling, with failing mechanical systems, nearing the end of its usefulness, but too valuable to simple demolish.

After considering several options including a sale, rebuild, capital repair, and rehabilitation, CityHousing Hamilton Corporation (CHH) opted to retrofit the building, making significant improvements at a fraction of the cost of new build. Why rebuild if you can retrofit?

As the first such retrofit in North America, the Ken Soble Tower project may provide a model for similar government-owed apartment complexes and with the building’s rehabilitation of 146 units of senior housing, is being closely watched by the affordable housing community.

Initially scheduled for completion in the Fall of 2020, due to the COVID-19 pandemic, CHH is looking at occupancy taking place in the Spring of 2021. Once construction began, the building also revealed additional areas of building deterioration, including extensive mould growth, breaks in the fire separation between units and inadequate plumbing. Addressing these previously concealed problems added to the scope of work and to project costs, which are currently estimated at $33 million.

Despite the problems, CHH chose to retrofit the Tower to meet EnerPHit Certification, a branch of the Passive House (Passivhaus) performance-based standard designed specifically for building retrofits. CHH says the project will provide residents with improved comfort, health and greater control over their indoor environments, and dramatically reduce the building’s environmental impacts. The project’s success will also create an emblematic case study that will guide government planners all over the continent.

According to Graeme Stewart, principal at ERA Architects, the project lead, retrofitting the Tower drastically reduced the cost compared to constructing a new building. 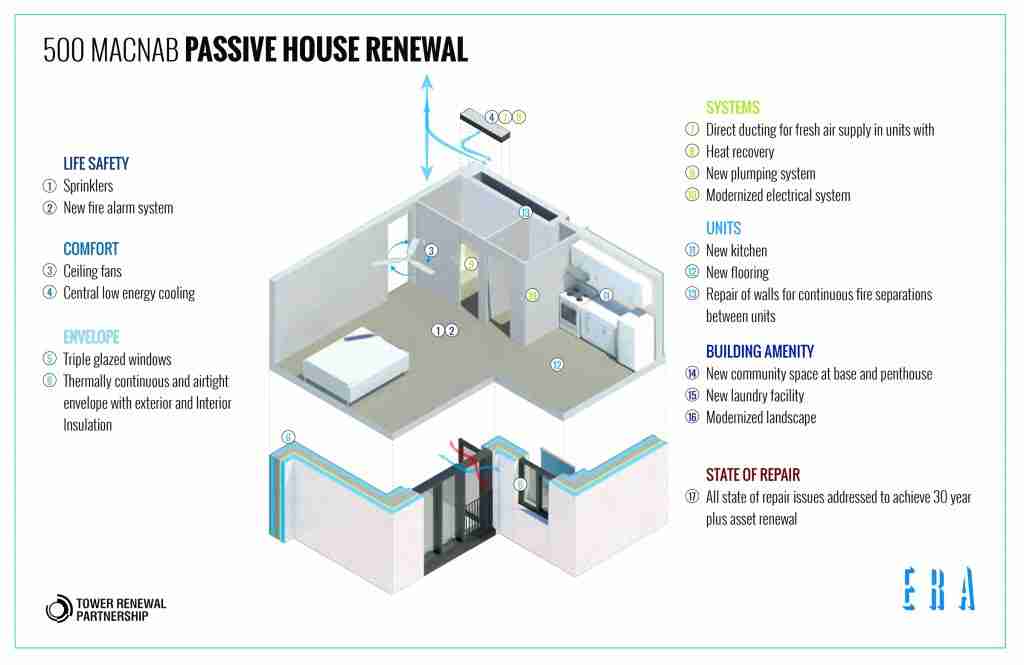 The Passive House retrofit will provide residents with improved comfort, health and greater control over their indoor environments.

“Even though it became a complete asset renewal project in which we replaced every electrical conduit and plumbing riser, we still did not have to do a $5 million demolition or construct an 18-storey concrete frame,” said Stewart, speaking to hundreds of architects and engineers around the world during a recent webinar. “So, it cost half as much as building new, and the embedded carbon figures are very compelling.”

Once construction was underway, more problems were uncovered. Inside the Tower, they found leaking risers, mould and asbestos in the walls, holes in the firewalls, an underperforming corridor pressurization system, and numerous broken fans. Even some of the door and window openings, balconies and other structural elements were deteriorating.

“It was effectively a gut job,” recalls Stewart.

Despite the problems, the project proves that retrofitting old apartment towers is possible, according to Ya’el Santopinto, ERA’s lead project architect. “It establishes a good model for healthier public housing, how to address certain thermal bridges and how to simplify the mechanical system,” she says.

Santopinto also noted that the perceptions of what make the project innovative have shifted.

“When we collaborated with CityHousing Hamilton the project’s primary innovation was a 94 per cent carbon emissions reduction target. Now, seen through the lens of a global pandemic, the building is innovative for its fresh air delivery, thermal comfort, and resilient back-up systems. Energy efficiency has become a secondary—though significant—co-benefit of health-centred performance.”

Moving the building to the non-fossil-fuel passive house standard would have provided reduction in emissions close to 100 per cent, but with approximately five years of useful life remaining on the domestic hot water boiler, it will remain in place for a time. The remainder of the plumbing and HVAC systems are all new and emissions-free. 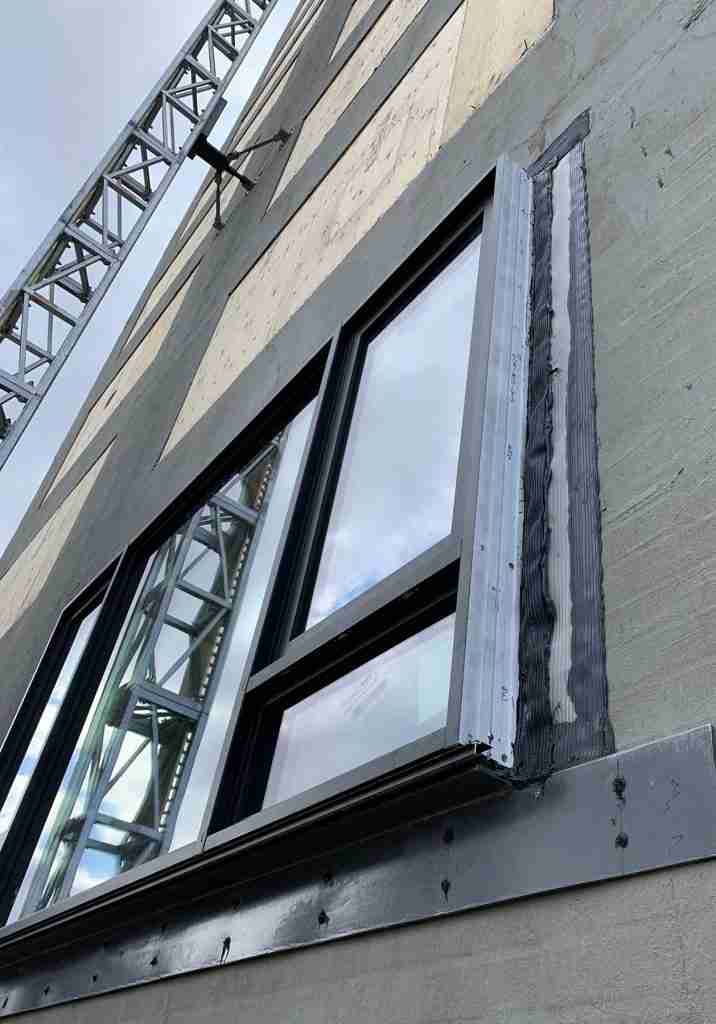 One innovative aspect of the project’s energy efficiency is that central VRF air handling has been placed at both the top and bottom of the building, according to mechanical engineer Cara Sloat, an associate with Reinbold Engineering Group, the lead engineer on the project.

“It’s pretty innovative because … [it]reduces maximum pressure and provides some control options. We supply one hundred per cent fresh air that is ducted through the energy recovery ventilators and can be boosted at the unit level using a supplementary coil, with each apartment having its own thermostat,” she says.

“In most standard high-rise apartment units there are four perforations in the envelope, but in this case, there are none. For venting we are using Studor positive air pressure attenuators and air admittance valves (AAVs), which are not very well known in North America. They allow air in without letting any escape.”

Because of the small loads all of the Tower’s 146 units’ heating and cooling needs will be managed through the ventilation system, says passive house consultant Joshua Vanwyck of JMV Consulting in Vancouver.

“In the buildings we created from 1960-1980 the conventional wisdom was that you would push air from corridors for ventilation. Now the industry agrees this is not an effective approach. Studies indicate that only 20 per cent of the air arrived at its destination. Now we actually duct and balance instead. It’s much healthier.”

The building envelope is highly insulated and tightly sealed. Triple pane passive house certified windows from Cascadia in Langley, B.C. will help control conditioning loads. Blinds are being installed to help with overheating due to solar gain, a common challenge for passive house projects. The balconies that come with many old buildings and create thermal bridge problems have been replaced with Juliet-style balconies.

Four inches of mineral wool insulation has been added beneath new cladding to the exterior of the building. The plan was for six inches, but when it was realized the drywall would all be removed, two inches was added on the inside instead.

It is expected that the building’s annual primary energy requirement per square metre will drop from 650 kWh to 130 kWh.

The plumbing is low flow and includes drain water heat recovery, and the appliances are all Energy Star, which all adds up to lower utility bills for the Tower’s senior residents.