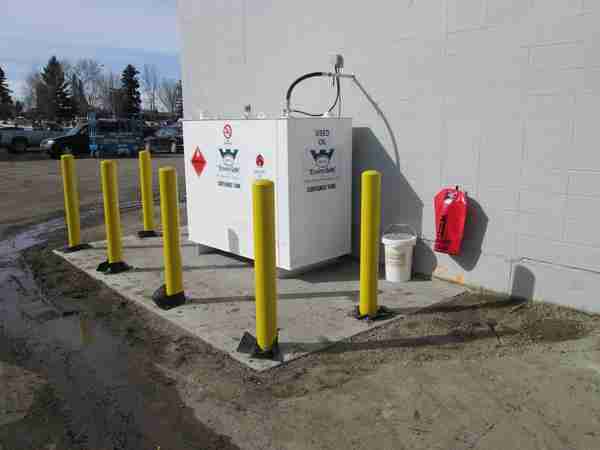 Alberta has clarified rules for oil storage and used oil storage tanks in industrial/commercial buildings.
One of several Fire Code Interpretation Standatas, published April 29, specifically relates to industrial buildings that use lubricating oil either for primary or supplementary heating, such as oil change shops, motor vehicle service and repair garages. The Standata is intended to clarify confusion over which CSA B-139 Installation Code for Oil-Burning Equipment and/or National Fire Code, Alberta Edition (NFC/AE) documents should be followed for the installation of these systems.
The good news for contractors and their used oil burning customers is that used oil storage tanks up to 5,000 litres do not need to be located in a storage room separated by a fire wall with at least a two-hour fire rating.
“The storage of used oil in storage tanks within an oil change shop, motor vehicle service and repair garage is considered incidental use and up to 5,000 litres of used oil is permitted to be in indoor storage tanks or portable tanks located outside of storage rooms conforming to Part 4 of the NFC/AE,” said the Standata. Incidental use means the oil storage is not related to the primary business of the shop, namely, in this case, automotive service and repair.

The rules are quite different for storage tanks and storage tank systems used to supply fuel to appliances, stationary engines, internal combustion engines and other oil-burning equipment.
In particular, there have been inquiries from designers and installing contractors for rooms “housing generators with storage tanks and storage tank systems providing power to non-life safety equipment,” says the Standata.
The 2019 National Building Code/Alberta Edition (NBC/AE) requires that an emergency or backup generator and its related equipment be separated from the remainder of the building by a wall having a two-hour fire-resistance rating.
“The type of generators in question may be referred to as backup or standby generators and have been used to ensure continuity of data/data backup but can be used for other purposes.”
As a result, these are considered non-emergency appliances.
Under the NFC/AE, while this equipment can be installed under the CSA B139 code or the National Fire Protection Association (NFPA) 37 Installation and Use of Stationary Combustion Engines and Gas Turbines requirements, it is important to note that it is not the equipment, but the storage tank/storage tank system supplying the fuel that dictates the required firewall rating, says the Standata.
As a result, they must conform to Part 4 of the NFC/AE and be located in a room separated from the building by a wall with a fire-resistance rating of two hours, among other requirements.
For more information, call Alberta Municipal Affairs, Community and Technical Support, at 1-866-421-6929 or e-mail safety.services@gov.ab.ca.