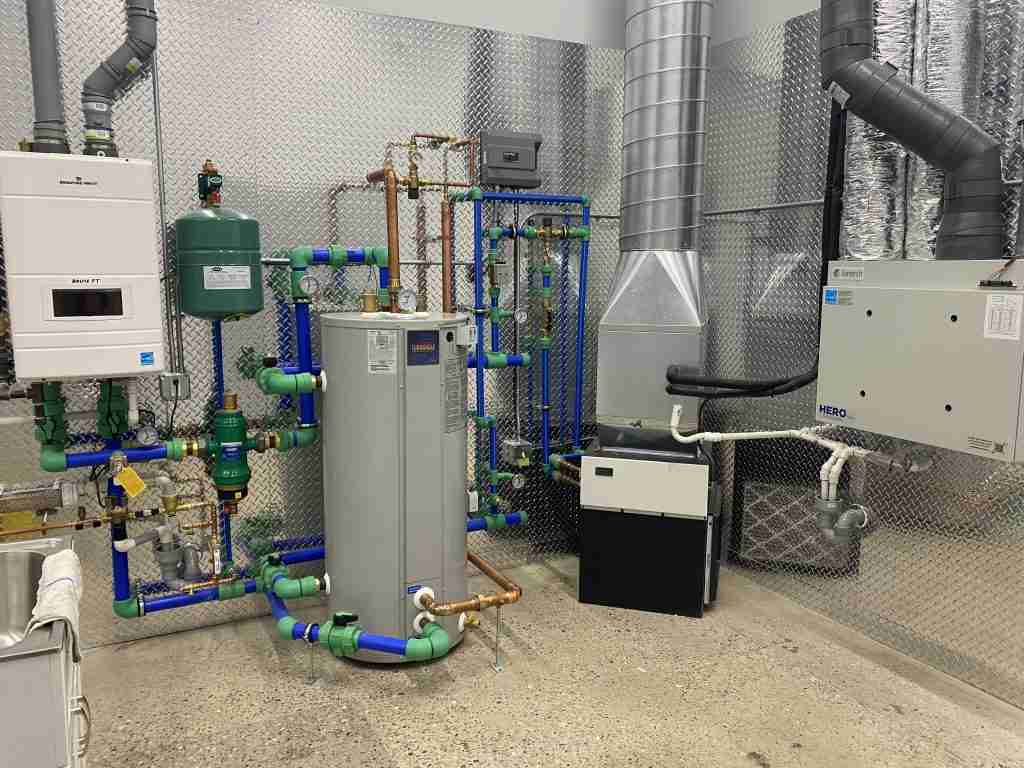 The mechanical system is compromised of several different manufacturers all working together to create a state-of-the-art office space, including Bradford White, TurboMax and Fantech.

Moving offices during a pandemic might sound like a tricky situation, but for Equipco, they were able to successfully pack up and move from near the Toronto Airport to southwestern Ontario.

“As an agency, we have sales personnel across the province working from their homes,” explains Dan Milroy, managing partner at Equipco Ltd. “COVID has taught us that we can work and be effective from anywhere. The rapid adoption of technology has enabled us to do so and has actually assisted in increasing our overall productivity.”

The decision to move offices began back in July 2019 due to traffic congestion surrounding the airport for employees and high rent pricing. For a short period of time, the office was even relocated to Milroy’s home as a temporary measure until finding a new space.

Located in London, Ontario, their new office features four mechanical systems: the snowmelt, central heat/cool, indoor air quality, and the IoT. “The Equipco London office and warehouse are both places where everyone can come together to brainstorm and work in a collaborative environment, and it also doubles as a showpiece where we have installed and run-in real-time, products from a virtual cornucopia of manufacturing partners and industry friends alike,” explains Milroy. For now, Milroy and two other employees are working in the new office.

The snowmelt system is powered via a Bradford White Brute FT Firetube heat-only boiler. Whilst the piping in the SIM is Aquatherm Blue SDR 17.6 PPR fully-fused piping. Connecting the boiler to the SIM distribution manifold is a Caleffi SEP4 low loss header, which provides air, dirt, hydraulic and magnetic separation.

The SIM distribution manifold is also manufactured by Caleffi and balances through the five-loop snowmelt area. The system is controlled by a hybrid of Tekmar SIM automatic sensors and Caleffi zone control switching relays. Venting from the boiler is Centrotherm PP. The SIM system is a 35 per cent to 40 per cent glycol solution with burst protection down to -50.

Central heating and air conditioning are powered by a Haier heat pump. When the heating load becomes too much for the heat pump, the backup system activates—another Bradford White Brute FT.

In terms of indoor air quality systems, they used Fantech’s Hero series HRV as the “lungs of the building,” according to Milroy. Fresh air reaches room temperature using a Stelpro inline duct heater.

“Our building is a haven for contractors, distributors, builders, engineers, designers, and architects alike to come and gather and talk about what the future of our industry looks like and to have that conversation with people who are driven and care feely about the work that they do,” explains Milroy.