A long time ago, in a land far away, I was taught that the only “proper” way to pipe residential hydronic heating systems was to use reverse-return piping (see Fig 1). The wisdom of the day was that flow rates would then self-balance and every radiator would get its fair share. Back then, in the mists of time, pumps were expensive and required regular maintenance. Most systems had a single pump and thermostat, and flows were adjusted at the radiators with throttling valves.

Since then, hydronic options have expanded exponentially, with pressure drop characteristics changing for every component from boilers through to terminal units. Many other piping arrangements have become popular as a result of these new technologies, and hydraulic design has become much more complex as a result. When flexible PEX pipe first hit the market, it was embraced by the radiant floor heating crowd first, however many of us immediately saw some other really interesting ideas. Although not a new concept, the home-run distribution model started to gain steam.

Ahead of the curve

Home-run piping is mostly used in residential and small commercial applications, but hybrid systems are also suitable for larger commercial and industrial buildings as well. It is tough to get into all of the fine detail in a short article like this, but the simplified drawings I have put together will help fill in some of the blanks as we explore. Keep in mind, these are concept drawings and only show the basic hydraulics of each piping method. There are many other necessary components required that are not shown.

Also note, I have changed the term “boiler” to “hydronic heat source,” trying to be ahead of the de-carbonization curve (think air-to-water heat pumps). Careful study of new equipment requirements will be needed regarding minimum/maximum flow rates as well as examining loading details. Short-cycling can be a major headache in multi-zoned hydronic systems.

As manufacturers upped their game and brought pump prices down and reliability up, parallel piping (Fig. 2) and primary/secondary piping (Fig. 3 and Fig. 4) became more popular, allowing much more flexibility to mix and match varied types of loads like radiators, indirect domestic water heaters and air handlers.

Hydraulic complexity grew along with these changes, and precise pipe sizing calculations and branch/terminal unit flow balancing grew in importance. Both mains and branch piping need to be sized with optimal pressure drops and fluid velocities to minimize pumping energy and reduce entrained air release respectively.

Specialty items like hydraulic separators (Fig. 4 and Fig. 5) were developed to help manage flow rates in multi-zoned systems and really came into their own when modulating boilers and variable speed circulators further complicated the picture.  The options with home-run piping are many—Fig. 5, Fig. 6 and Fig. 7 are just three ideas to consider.

Loads can be zoned using pumps, zone valves with electric motor actuators, and thermostatic radiator valves, which is a very under-utilized technology that should gain popularity as heating loads decrease. Most designs will use a single manifold, with tubing running from the mechanical room directly to the terminal unit and back.

Coming down the pipeline

Below, are a few important changes and innovations that have boosted the idea of home-run distribution piping more into the mainstream in the last couple of decades: 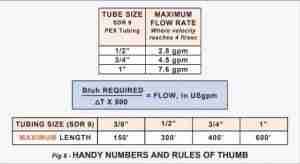 Some of the main benefits to keep in mind from a home-run design is reduced costs, easier and more accurate design calculations, unobtrusive installation—including ease of running and concealing piping, very few concealed fittings, and lastly, mechanical components such as zone valves and pumps can be consolidated in the mechanical room instead of at the terminal units.

We have just scratched the surface in this article. Look deeper into the concept of hydronic home-run distribution piping and I think you will be sold on the idea for some of your future projects.