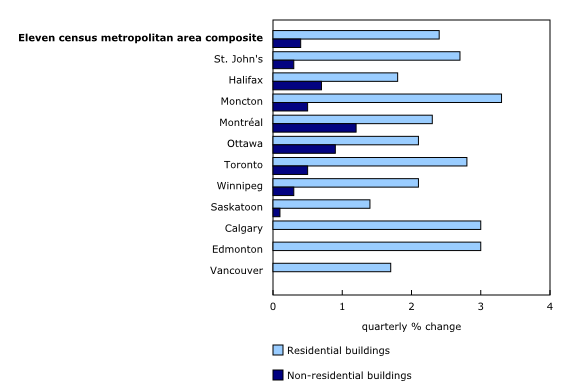 Supply chains for lumber continued to be strained as both supply and demand pressures drove lumber and other wood product prices up in the third quarter. Contractors also reported increased retail demand for lumber, with retailers selling directly to homeowners for do-it-yourself projects.

According to the survey, demand for building materials also increased in the third quarter. According to the Sawmills survey, even though total softwood and hardwood production was up on a year-over-year basis in June (+0.7 per cent) and July (+1.5 per cent), these increases did not offset the steep year-over-year declines observed in April (-33.5 per cent) and May (-18.7 per cent) due to mill shutdowns. Although total softwood and hardwood production increased in June and July, shipments for those same products were down in June (-6.2 per cent) and July (-0.7 per cent) from the previous year. This may be attributable to truck driver shortages and decreased rail car availability. Additionally, a strike at the Port of Montréal led to disruptions in regular port operations in August, which later trickled to other Canadian ports, creating further rail car imbalance across the country. Pressure treated lumber and oriented strand board were cited as the types of lumber products with the lowest available supply. The shortages for these products could continue well into the fourth quarter.

“As the seasonality of the construction industry slows demand in the fourth quarter, suppliers may have the opportunity to catch up on production and complete outstanding orders,” stated the report. “This may help some contractors catch up on existing projects currently constrained under the new work conditions, as well as by ongoing labour and material shortages.”

Nationally, construction costs rose for every residential building type included in the survey in the third quarter, with increases ranging from 0.9 per cent to 2.9 per cent. The largest quarterly price increase was for townhouses (+2.9 per cent), followed by single-detached houses (+2.8 per cent).