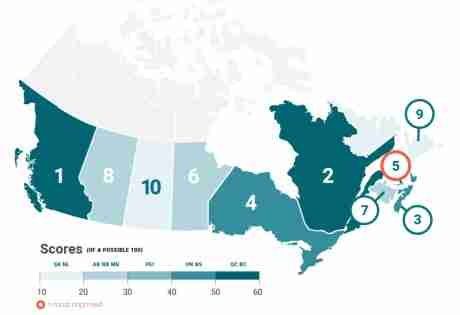 British Columbia and Québec retained the top two spots on the overall rankings. B.C. led in both the “enabling policies” and “buildings” categories. Québec led in “transportation.”

Prince Edward Island improved in overall ranking compared to last year’s report. This year they jumped two spots in the overall ranking. They also took first place in the “programs policy” area. This was largely due to strong performance in electricity program savings and spending and investments in low-income and indigenous people’s programs.

Things weren’t as great for Alberta. They dropped the furthest in rank amongst all the provinces. This was largely due to lower electricity and natural gas programs. Ontario and Manitoba each dropped one spot in overall rankings, while Nova Scotia and New Brunswick each moved up.

The rankings are as followed: 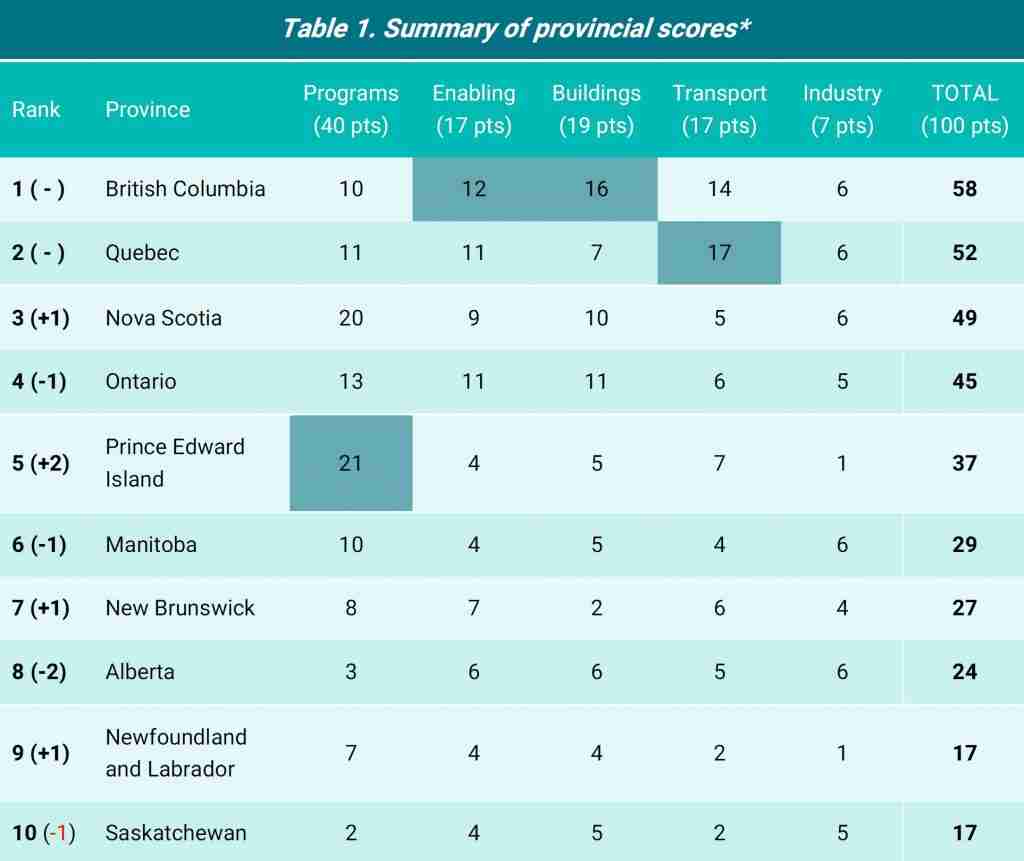 Provinces were ranked and scored based on five subcategories (energy efficiency programs, enabling policies, buildings, transportation, and industry) for a total of 100 points. See Figure 1 for the full rankings. There are 42 separate metrics, representing 16 topics across the five areas.

For energy efficiency programs, Nova Scotia led capacity savings from efficiency programs as a percentage of peak demand, although no province approached top U.S. states on the metric. Only Québec and British Columbia currently have transportation fuel saving targets.

Alberta lost points in the enabling policy category due to cancelling their $30/tonne carbon levy, which funded the activities of Energy Efficiency Alberta (amongst other programs) and dissolved the provincial agency in 2020.

Ontario has gone the furthest in formalizing planning procedures for non-wires alternatives to address regional/local grid constraints—numerous other provinces are actively studying the topic and conducting pilot programs.

In the buildings category, notable developments included four provinces reporting plans to update their building codes, according to the report. Three provinces have identified activities taken toward adopting the 2020 national codes when available. Nova Scotia introduced a pilot program on energy rating for commercial and institutional buildings but does not include mandatory disclosure requirements.

For the transportation category, British Columbia passed a zero-emissions vehicle mandate in May 2019, and Québec achieved 100 per cent compliance in the first period of its ZEV mandate. More than five per cent of vehicles sold in both provinces too in 2019 were electric or plug-in hybrid electric vehicles. This adoption rate is over halfway to the federal government’s 2025 target. 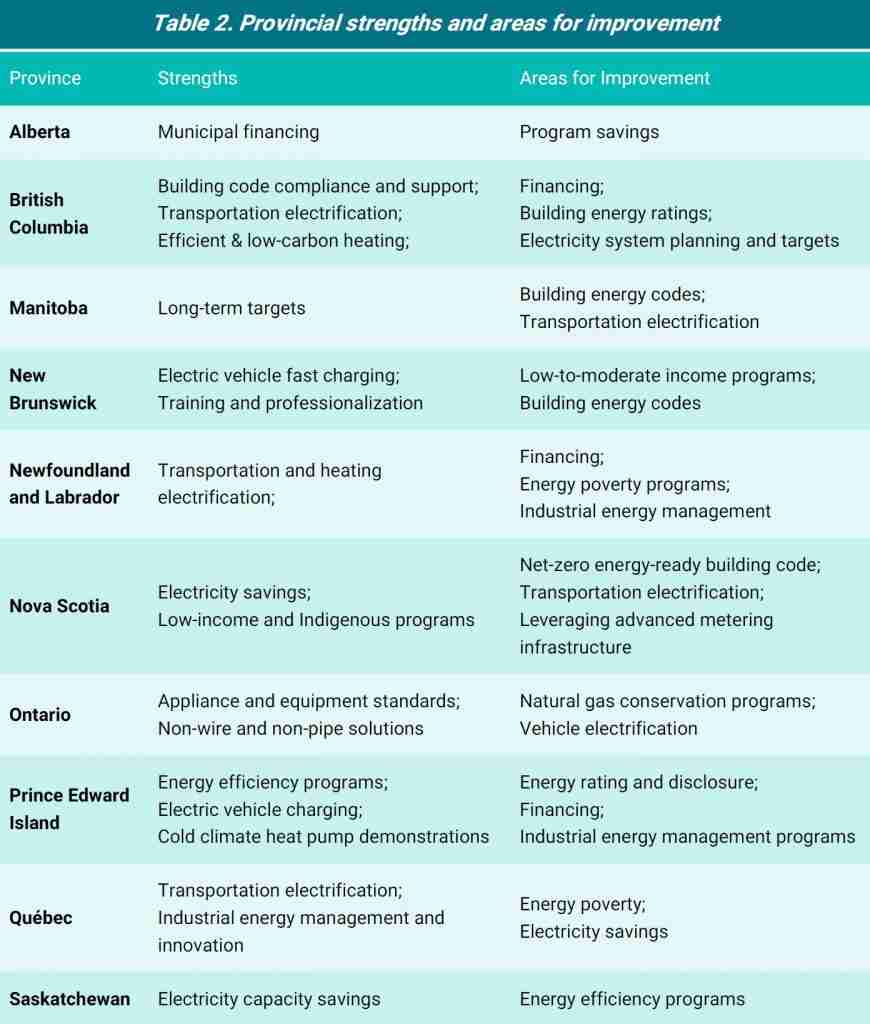 As per the report, provinces received a list of strengths and weaknesses that should be improved upon. See Figure 2 for details.

In July 2020, the Canadian federal government joined the “Three Percent Club”—a collaboration of governments that are “committed to working together to put the world on a path to three per cent annual efficiency improvement,” according to the report. Given this commitment, five federal government policy priority suggestions were listed:

The federal government will need to triple its current efforts towards the “Three Percent Club” as the country is averaging around one per cent improvement with current initiatives.

Overall, provincial budgets increased from 2017 to 2018, per this year’s scorecard. Yet, it is expected in future years to decrease savings and budgets due to policy changes in large provinces—such as Ontario and Alberta.

Increased provincial action in areas such as building codes, which need to continue as the federal government publishes updated model national codes intended to put Canada on a path to net-zero energy ready buildings by 2030.

The pandemic affected the overall collection of data due to workers “stretched thin” and unable to immediately provide information requests. Data collection began two weeks after the start of the pandemic.

The Canadian scorecard is modelled after the American Council for an Energy Efficient Economy (ACEEE) state policy scorecard. Territories are not included in the scoring due to difficulties accessing information and finding useful comparisons.