Ottawa, ON — A new study from Statistics Canada sheds light on the labour market transitions of newly certified journeypersons using 2018 tax data, the most recent year for which these data are available.

The employment income of those who certify in the trades, otherwise known as journeypersons, varies markedly across Canada, with those plying their trade in the North and Western Canada making more on average in 2018 than those in Central and Eastern Canada. Despite this, starting employment incomes of newly certified journeypersons in the resource-rich provinces of Alberta, Saskatchewan, and Newfoundland and Labrador have fallen since 2014, while the income of journeypersons in Central Canada has risen.

Although these data pre-date COVID-19, they establish important baselines at a time of rising concerns around starting an apprenticeship or graduating into an uncertain economic environment during the pandemic. 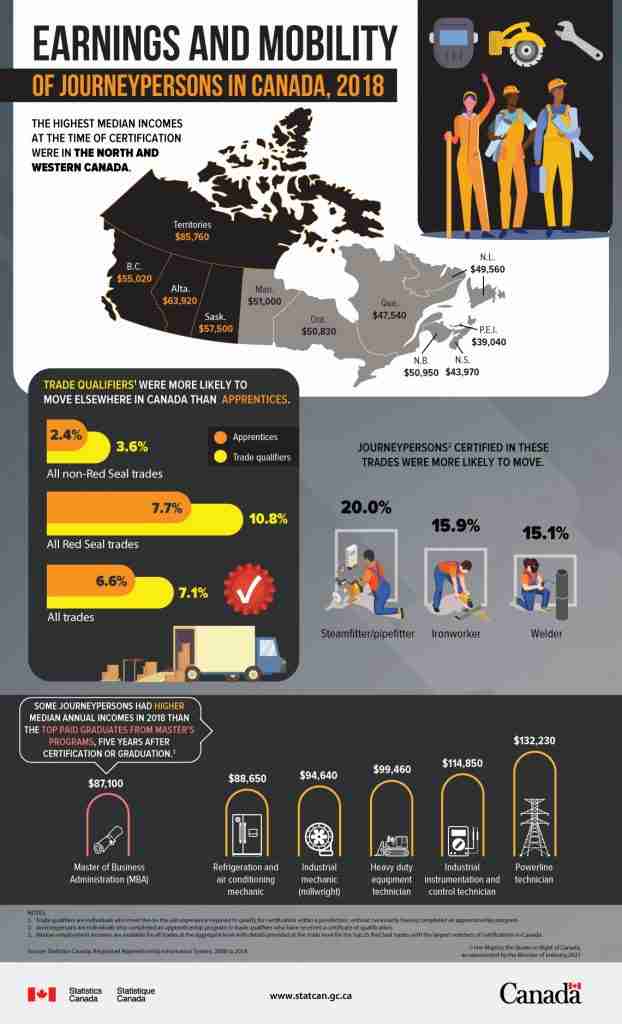 Despite leading all other provinces in earnings for journeypersons, Alberta, as well as the other resource-rich provinces of Saskatchewan and Newfoundland and Labrador, have all faced economic challenges in recent years. After the collapse in crude oil prices in 2014 to the end of 2018, employment numbers in trades, transport and equipment operators and related occupations fell in Alberta (-8.6%), Saskatchewan (-5.2%) and Newfoundland and Labrador (-4.5%). Over this same period, new certifications in the trades were down by more than a tenth in these provinces, while new registrations in apprenticeship programs fell by nearly half.

The economic challenges in these provinces also led to falling median employment incomes in the first year of certification. For example, journeypersons who were newly certified in Alberta in 2014 had a median annual income of $85,780 in their first year, compared with $63,920 for those who were newly certified in 2018, a one-quarter (-25.5%) decrease in first-year earnings. Newfoundland and Labrador (-38.4%) and Saskatchewan (-15.1%) also saw considerable declines in first-year earnings for newly certified journeypersons over this period.

During that period, it was a different story in Quebec and Ontario, where housing construction and investments in infrastructure projects led to strong employment growth in the construction industry and in trade-related occupations. While the median annual earnings at certification remain lower than in Western Canada, first-year earnings rose by more than 7% from 2014 to 2018, to $50,830 in Ontario and $47,540 in Quebec. This may be due, at least in part, to more favourable economic conditions and higher rates of unionization in these provinces than out west.

In 2018, one year after certification, 6.8% of journeypersons either lived or worked in a province or territory other than their place of certification. This was down from the peak of 9.4% in 2014, and marks the lowest point since 2008, the first year for which data are available.

Alberta continued to be a hub of interprovincial mobility in 2018, playing a key role in the mobility of nearly three-fifths of mobile journeypersons. Alberta welcomed the largest number of mobile journeypersons (705) and lost the most (1,185) of all the provinces and territories. This comes as Alberta and Saskatchewan continued to have the highest earnings among the provinces for newly certified journeypersons, while also facing rising unemployment rates and falling employment numbers in the trades in recent years.

As economic uncertainties rose in Alberta and Saskatchewan, the number of newly certified journeypersons who chose to leave these provinces rose from 2014 to 2018. At the same time, many fewer journeypersons chose to move to these provinces from Ontario, British Columbia, Quebec and the Atlantic region than in 2014, opting to stay in their province of certification instead.