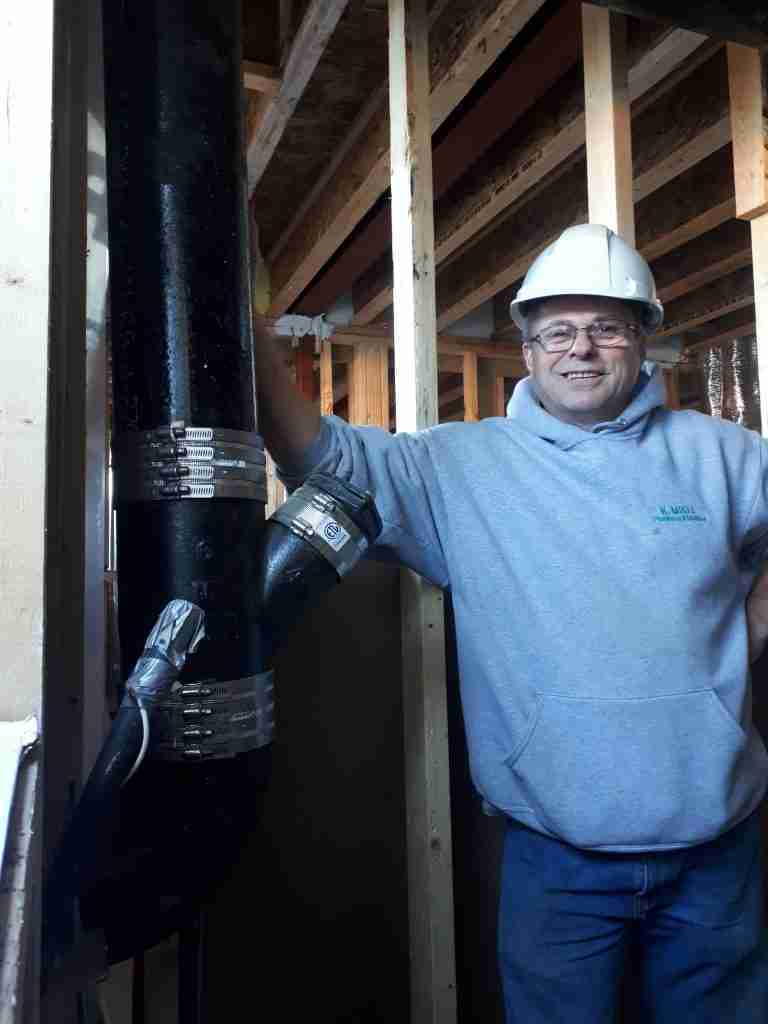 According to Keith Mikel of K. Mikel Plumbing and Plumbing in Kitchener (pictured standing beside cast-iron rain-water leader), changes made to the plumbing code have benefited his business in a big way.

Home is where the heart is, but more importantly, home is where your bathroom is. For many, it’s the only place they feel comfortable enough to satisfactorily answer nature’s call.

My travel group, the “Wild Hogs” solved this problem by bringing our own bathroom with us in the form of a fully equipped camper trailer. It made a huge difference in our travel plans when we didn’t have to rely on roadside gas stations to take care of business.

It also opened up a whole new customer base opportunity for me. I didn’t realize how many people’s place of residence was actually seasonal shut-down and regular maintenance. With a little research and some industry networking, I discovered that there are many under-serviced trailer parks in my area.

A shrewd plumber could make a good income just following up first time recreational vehicle buyers and changing the water heater tanks that split after their first winter’s unsuccessful shutdown.

The skyline in my hometown is rapidly changing. From my backyard I can now see dozens of high-rise apartment buildings and tower cranes where just a short time all I could see was farmland. What I can’t see from my vantage point is all the town-home style and fourstory walk-up condominiums that are going up at an equally frantic pace. My friend Keith Mikel is heavily involved in this type of construction in the Kitchener-Waterloo area. He and his lovely wife Barb have been successfully running K. Mikel Plumbing and Heating for many years, and Keith tells me that some of the changes made to the plumbing code have benefited his business in a big way. 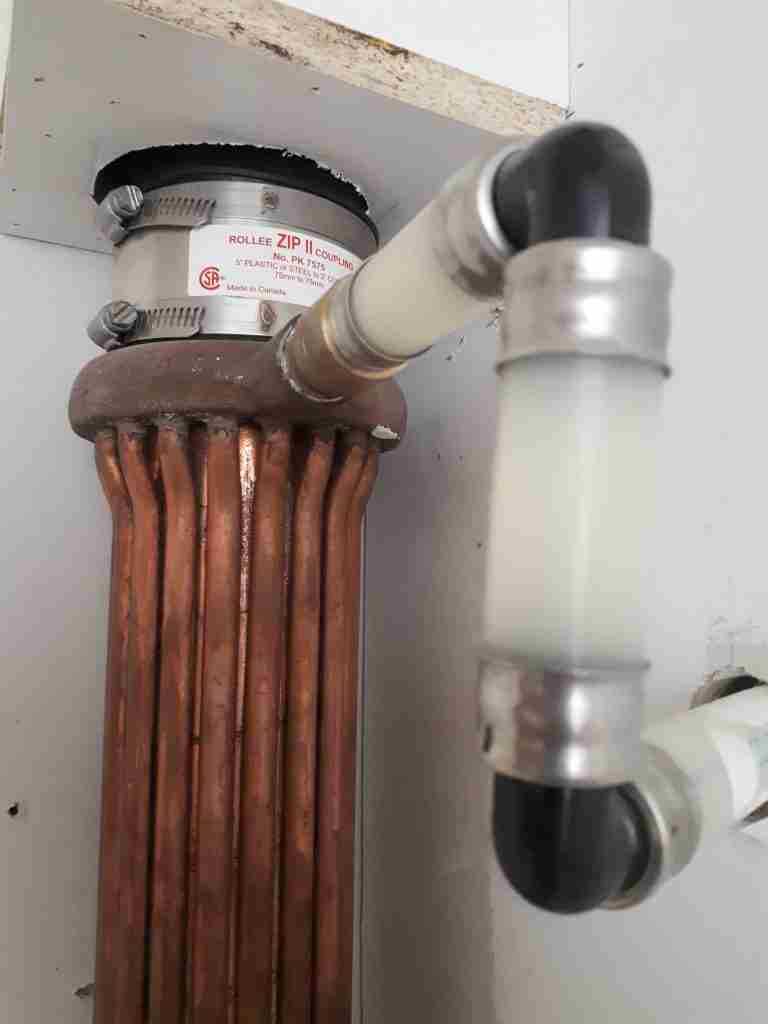 New requirements for drain waste heat recovery devices, known as “power pipes,” to be installed in multi-unit residential projects has been good business for many plumbers.

The requirement to include a “power-pipe” in every new dwelling is an automatic big-ticket sale for each unit of any residential building project.

A “power-pipe” is essentially a heat exchanger that uses the leftover energy from shower run-off to pre-heat the supply water to the hot water tank. It’s a great idea because very little of the heat contained in the water is actually used while showering—the rest goes down the drain and would otherwise be wasted. By some accounts, the overall energy consumption used in the average home is reduced by 10 per cent when these devices are used.

The original devices were comprised of multiple half-inch copper coils circling horizontally around a three-inch vertical copper DWV core. Copper is used for these devices because of its heat transfer properties but the coils now run vertically, because it’s a more efficient method of recouping the residual energy from the wastewater.

The devices are typically installed in an ABS vertical stack that serves two or more showers by means of mechanical couplings and are expected to operate maintenance free for the life of the building.

The amendments to the wet-venting regulations have allowed for much larger room sizes which is right in line with the open-concept style of modern construction. After seeing how well all the ventless, handyman drains worked in Ontario’s lawless north-country, I knew we were over-venting down here in civilized society. I applaud the rule makers for paying attention to the reality of our trade.

One newer piping system I know of but don’t know about is the one used to eliminate radon gas from the living space.

This gas comes from the natural decay of uranium in soil, rock and water and enters the home through cracks in the floor or walls. Long-term exposure is said to be carcinogenic to everyone, but I’ve only ever seen the systems used in subsidized housing projects.

Radon gas removal systems operate by creating a vacuum in the soil below the foundation. An active radon vent fan is installed to create a permanent and consistent negative pressure within the system. The negative pressure draws the radon gas to the suction point(s) where it is sucked through the radon system and vented to a safe elevation above the home or building. 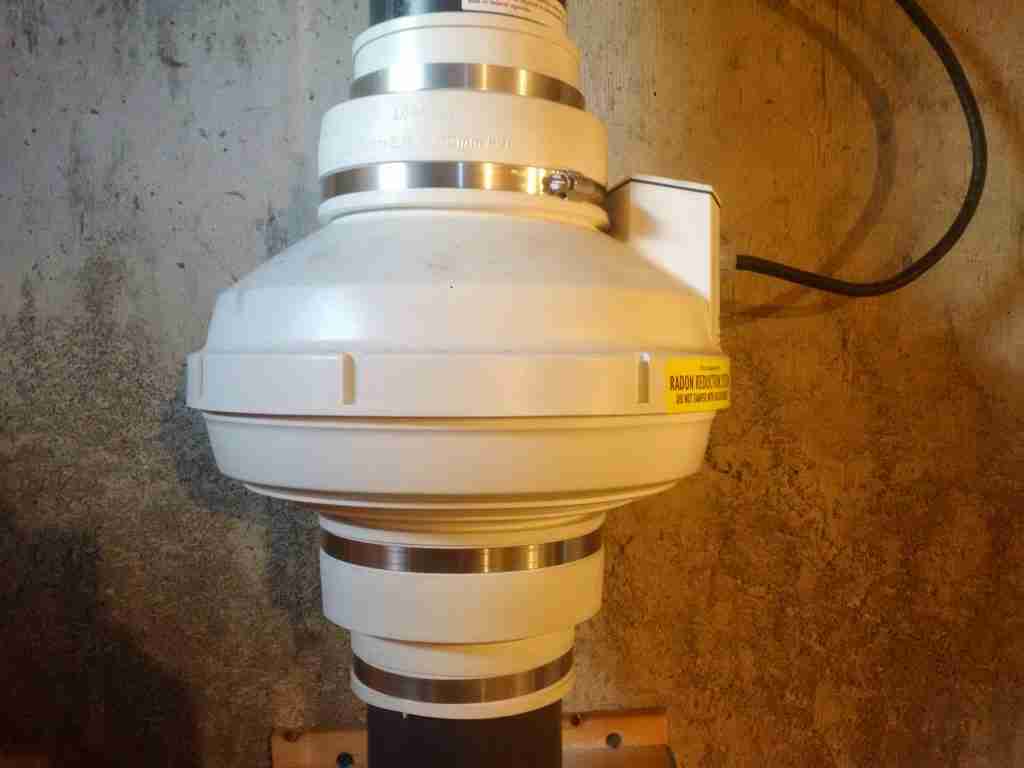 Radon gas removal systems operate by creating a vacuum in the soil below the foundation. An active radon vent fan is installed to create a permanent and consistent negative pressure within the system. The negative pressure draws the radon gas to the suction point(s) where it is sucked through the radon system and vented to a safe elevation above the home or building.

The biggest change I see in modern residential construction is the enforcement of social distancing and the use of masks on the job site. Finally, it is against the law to over-crowd, something that is overdue in my opinion.

“Finishing” is supposed to be the easy part of the job, but with every trade trying to work in the same place at the same time, it can be the most aggravating. A typical scenario in the final days of a by-gone project would have the plumber carrying a heavy fixture up the street because there’s no parking, bumping into the painter in the doorway, tripping over the tile installer in the hall, knocking down the stair guy, fumbling in the dark bathroom while the electrician mounts the light fixtures overhead, etc. I believe that having space to operate is a legitimate safety concern and it’s high time we made the change.

Social distancing is also good for keeping “helpful” homeowners from getting too close. I’ve often said that I use the phrase “excuse me” more than any other while on site. I recall one incident when I was trying to install a large and very heavy shower base and the homeowner-to-be insisted on “helping” me. With her painted toenails exposed, she put herself right in the danger zone. Of course, this threw me off my game and I wrenched my back trying, unsuccessfully stop the unit from gouging a hole in the wall. The weight shifted and in just a split second I had to choose between her pink little toe and a costly repair job.

It always seemed odd to me that “finishing” was done under those conditions because that’s when it matters most. The final presentation to the customer is what sells the job, after all, we’re building the most private place in their lives.

Be it ever so humble, there’s no place like home.