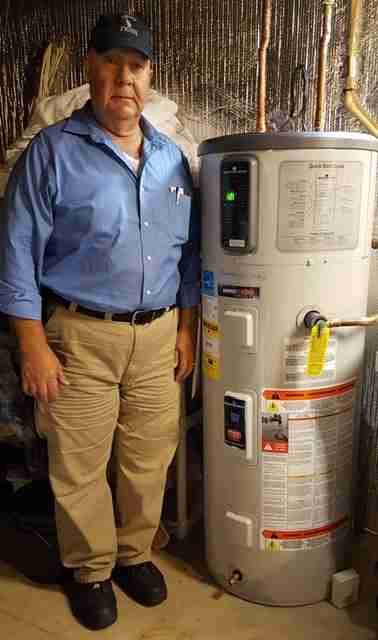 Heat pump water heaters didn’t get off to a good start in this country. Early attempts at this technology performed poorly and were unreliable. With input water temperatures barely above freezing in some regions, trying to bring water up to 60C (140F) with a heat pump alone wasn’t realistic.

As a result, today’s highly efficient heat pump water heaters are a hybrid of a heat pump and an electric storage-tank water heater. They offer efficient operation most of the year on the heat pump, but when a boost is needed, the electric element kicks in.

“It is an electric water heater and it is a heat pump water heater, so I am going to use the heat pump to move heat as often as I can because when I move heat that way it takes a fraction of the money to make that happen,” remarked Gregg Holladay, business development manager at Bradford White, Ambler, Pennsylvania.

The heat pump side has improved significantly over earlier technologies. Today’s units will supply the majority of the hot water that the typical home requires in everyday use.

“In hybrid mode, it uses the heat pump as the primary (water heating mode) and the resistance elements are secondary to help it recover faster or because of a high water temperature differential,” remarked Patricia Kirchner, residential market manager for A.O. Smith, Fergus, Ont.

“It’s the best of all worlds,” remarked Mark Muzyka, national sales manager – water heaters, for Rheem Manufacturing Canada, Brampton, Ont. “You get the power that you can get with an electric water heater for better recovery; you use ambient air resulting in less expense to run it.”

Most of the major water heater manufacturers offer a hybrid heat pump version today – the AeroTherm series from Bradford White, the Voltex hybrid from A.O. Smith and the Professional Prestige Hybrid Electric from Rheem are among today’s offerings. They are more compact than earlier versions and available in multiple sizes.

“If your 13-year-old jumps in the shower and drains the tank, I can turn the heat pump off and use the same elements you were using on your previous electric tank and your recovery time is exactly the same,” said Holladay. In hybrid mode, the heat pump control will do this automatically.

The homeowner might also switch to electric mode if the ambient air temperature is too low, noted Kim Laurette, A.O. Smith director of retail sales and marketing. However, the unit will default back to hybrid if left there.

The electric element also largely solves the issue of low input water temperature, while allowing the unit to operate in energy-saving heat pump mode for much of the year, depending on the region. That may be five months in Winnipeg, but 11 months in Victoria.

“The cold water isn’t really as big of an issue today,” noted Muzyka. “We can run these all through the fall and spring (in heat pump mode) whereas before, we couldn’t.”

Since 2017, in the U.S., all water heaters have been required to be tested and rated by Uniform Energy Factor (UEF), which replaced energy factor (EF) ratings that were proving inconsistent from one brand to the next.

However, the heat pump boosts that to over 300 percent because the amount of energy transferred to the water is much greater than the electricity input. So, in heat pump mode, the Bradford White AeroTherm hybrid, for example, uses 550 Watts to bring the water up to 60C. The backup electric element requires 4,500 Watts of power to do the same – so maximum energy savings are achieved by having the water heater operate in heat pump mode as much as possible, said Holladay.

Today’s units are more compact. “For the plumber, it’s much easier to install. You don’t need three guys to carry it down the stairs anymore,” remarked Muzyka.

The ideal is to locate the hybrid unit where there is a source of warm air, like the furnace room, said Kirchner. Hybrid tanks require about 700 cubic feet of ambient air to operate properly. The heat pump will typically draw the temperature down by 3-5F when operating.

“If the room doesn’t have the volume, that’s where you would use a duct kit” – something all manufacturers offer and which can be used to bring air from another part of the house.

Drawing air from outside as much as possible also minimizes the load on HVAC equipment and the “free heat” during the summer months is considerable. A damper can be installed in the system to switch from inside to outside air.

“We also have a kit to exhaust the cooler air if you don’t want to cool the location where the water heater is installed,” added Kirchner.

Sizing is typically the same as for an electric water heater. However, there is an advantage to going a little larger to cover additional demand when required, she added. “You could actually go higher in terms of gallon capacity to encourage more heat pump operation because it doesn’t have to recover as quickly.”

Gas water heaters recover more quickly, so a 50 or 60-gallon hybrid might be used to replace a 40-gallon gas model.

Like any water heater, it’s critical to have a conversation with the customer about what their needs are, noted Laurette. “It’s really about understanding what the requirements are from the consumer and what their peak demand looks like.”

A hybrid water heater costs between $1,800 and $2,200, or about four times the price of electric water heater with similar features like WiFi. Payback, depending on usage, is typically about four to five years, said Muzyka. Of course, the higher the water use the quicker the payback.

Rebates, currently available in B.C. and Nova Scotia, will reduce the homeowner’s cost and help make the sale.

“It is a growing market. The level of interest has grown significantly. We are starting to see the level of sales match the interest.”