In the last issue, we discussed the theory behind why operating refrigeration systems in low ambient conditions can be challenging. In this issue, we are going to discuss several of the methods used to control low ambient condenser operation.

This is a bit simplified, but basically, the amount of heat a condenser can reject follows this formula:

The simplest way of decreasing the capacity of a condenser is to simply turn the fan off. With no air moving through the condenser, the heat transfer decreases rapidly. Since there is a lot of change in condenser capacity at once with this method, the condensing pressure can be quite volatile. The colder the air the less effective this method becomes because even a single fan cycle on can drive the pressure too low. On multi-fan condensers, this process is a little bit smoother because the fans can be shut off in sequence and each individual fan has less effect on the overall airflow than units that only have one fan.

Using fan cycling and fan speed to control condensing temperature works in moderately cold climates fairly well providing the refrigeration load on the system (i.e. the amount of heat we are absorbing in the evaporators) remains fairly high and the system is running at high capacity even in the winter. If we have to run at low capacity in the winter or at really low outdoor temperatures, modifying the airflow is usually not enough.

The only other tool we have available is to modify the surface area or the physical size of the condenser. It might seem like this isn’t really possible but there are a couple of different methods we can employ here. One is condenser splitting, which just means that we design the system with multiple condensers and isolate one of the condensers when it becomes cold outside. This is done manually by closing valves in many industrial plants and automatically with solenoids in grocery store-type systems. These types of setups also have limitations, but when combined with fan cycling or speed control can significantly increase the outdoor temperature range in which condensers can operate effectively.

Imagine if we somehow could hold the refrigerant in the condenser and fill it up like shown in Figure 3.  In this case, the refrigerant has much less room available to do the de-superheating and condensing. This decrease in volume has the exact same effect as making our condenser smaller. 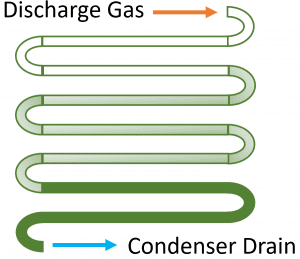 There is however a consequence of doing this which is that heat does continue to be removed from the liquid refrigerant and the liquid can become very cold. This does not mean it’s at a low pressure, instead what is coming out of the condenser is subcooled liquid (and in really cold weather, it can be really subcooled). There are a few minor issues this causes with refrigerant flow in the receiver, but the more common problems come from the fact that in the winter the condenser drain piping can be very cold and cause condensation and dripping. In order to prevent this, the condenser drain line may need to be insulated in installations with remote condensers and condenser flooding controls.

Depending on the exact method employed to hold back the refrigerant in the condenser, there are other consequences to the operation of the refrigeration system that need to be addressed when we decrease the condenser surface area in this fashion. In the next issue, we will take a look at the exact valving and operational set-ups for condenser flooding controls that maintain head pressure in cold operating conditions. Additionally, we will discuss the operation of condenser flooding controls in combination with fan cycling and condenser splitting.