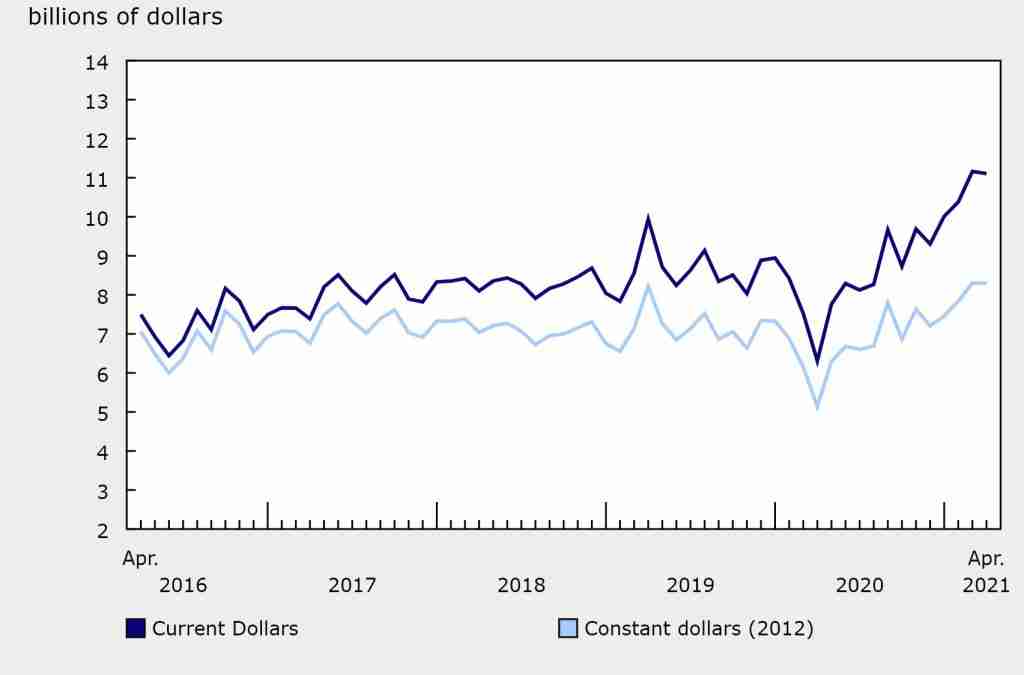 Ottawa, ON—Following a record March, the total value of building permits remained at historically high levels in April 2021; only edging down 0.5 per cent to $11.1 billion. This slight pullback was mainly due to declines in the residential sector in British Columbia and Quebec. This outweighed national gains in the non-residential sector. On a constant dollar basis, building permits were largely unchanged, reports Statistics Canada.

In the residential sector, the value of building permits fell 6.7 per cent to $7.7 billion. Even though there was a decrease, this was the second-highest value on record—British Columbia and Quebec accounted for most of this decline.

Multi-family dwellings dropped 6.5 per cent to $4.1 billion. Gains in Ontario and Alberta were not enough to offset decreases in British Columbia and Quebec, where several large permits had been issued during the previous month.

Eight provinces reported a decline in the value of permits issued for single-family dwellings, with the national total down seven per cent to $3.6 billion. This was mainly a result of fewer new projects in Ontario and Quebec.

Overall, the commercial and institutional components boosted the non-residential sector. Commercial permits surged 28.7 per cent to $1.9 billion in April. A $97 million permit for the Sick Kids patient support centre in the city of Toronto and an $80 million permit for the Centennial Community and Aquatics Centre in the city of New Westminster, B.C. These were among several large permits that were issued in April.

In contrast, the largest commercial permit issued nationwide in March was valued at $43 million and was for a warehouse in the city of Pickering, Ont.

The value of institutional permits increased 23.1 per cent to $910 million, led by Quebec, which rebounded from a 53.6 per cent drop the previous month. A new hospital in the city of Saint-Jean-Sur-Richelieu was one of the several large permits issued in Quebec.

The value of industrial permits fell 13.2 per cent in April to $592 million. Ontario accounted for most of the decrease, as fewer permits for large projects were issued in the province compared with the previous month.

Overall, the value of building permits in the non-residential sector climbed 17.4 per cent to $3.4 billion.