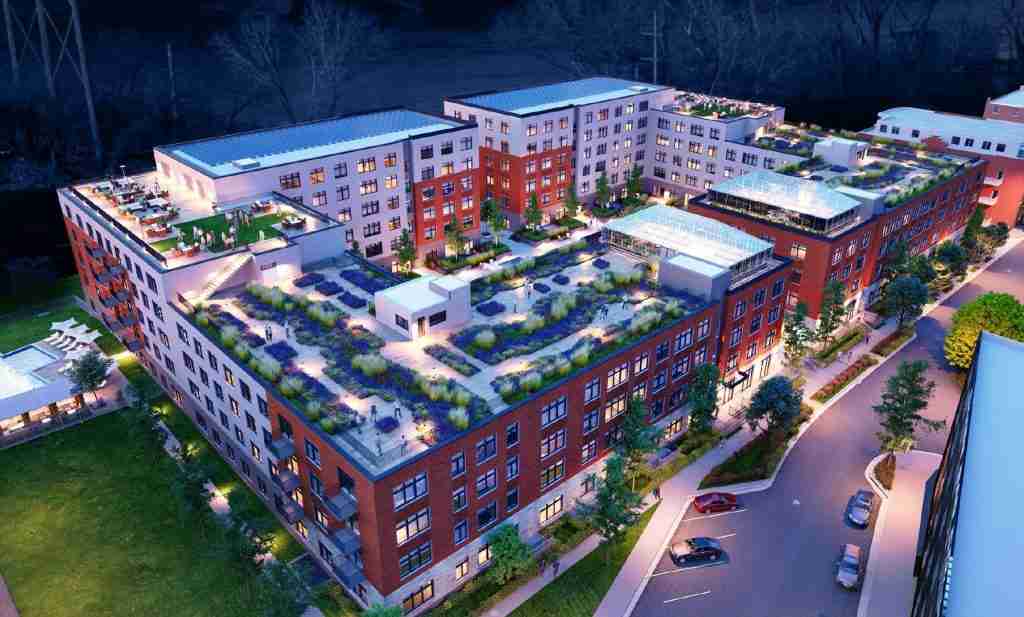 The Second & Delaware development in Kansas City is a significant VRF project for its Vancouver-based mechanical designers.

I know a British gentleman who now lives in Canada. I don’t want to suggest that he thinks he’s royalty, but he lets me call him the “King of VRF,” and he claims he provided expert counsel to a friend who lives at Buckingham Palace.

“The Queen of England has a VRF (variable refrigerant flow) system, and so does Scotland Yard,” said Aaran O’Connor, operations manager for Concept VRF Systems in Mississauga, Ont. “I installed them.”

O’Conner came to Canada eight years ago as part of the British invasion of the HVAC industry. To be more accurate, we should say the European and Asian invasion. VRF was popularized in Asia and energy-stressed Europe. Adoption here has been driven largely by Japanese and South Korean manufacturers like Daikin, Mitsubishi, and LG. 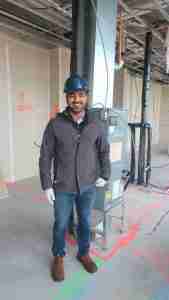 Engineer Kartik Singla with one of the building’s VRF vertical coils.

VRF heat pump systems are now popping up in medium-size office condominiums like The Jack, a modern 11-storey residence in uptown Toronto. It features 153 units in varying sizes, including a couple of luxury penthouses, but with contemporary setback architecture, it looks like a smaller building from outside.

There are 26 Daikin VRV-IV heat recovery outdoor condensers on the roof, which connect to Daikin single port branch selector boxes. Then, depending on unit size and floor plan, they connect to one or more vertical air handlers or ceiling cassettes for delivery of heating and cooling inside residences.

“The verticals are about 46” x 18” and the ceiling units are about 10 inches in height, making them easy choices for condominiums,” said O’Connor. Ten years ago, these systems were considered expensive, difficult to source and unable to perform in cold weather. Today they’re rated for -25C, competitively priced, supplied broadly and assembled in North America.

Since coming to Ontario, O’Connor has installed numerous VRF systems, including at Mohawk College in Hamilton, in a hospice in Orillia, and for training rooms for DXS, Daikin, LG, and Samsung. Future installations include the 552-unit Scala project in Bayview Village in Toronto, the Transit City Towers in Vaughan, and more training rooms for York, Hitachi, and Lennox.

O’Connor notes that Michael Bornemann, the owner of Concept VRF Systems, believes there will be many more VRF systems installed in the future because they offer numerous benefits including individual zone control in the occupied space. “The central system sets up basic temperatures for the building for 8 a.m. to 5 p.m., and then occupants can use their remote to make modifications for comfort.” 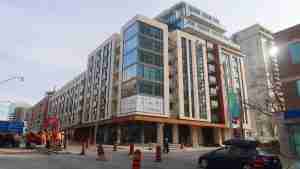 VRF allows occupants of the 11-storey Jack building to have a high degree of control over their indoor climate.

As cities continue to work towards decarbonization, VRF systems are likely to grow in popularity, added Kartik Singla, principal at Direct Expansion Solutions of Toronto, the VRF consulting engineer for The Jack.

“The coefficient of performance (COP) with basic VRF is about 3.0 during heating season, but it goes way up for the models used on this project that do simultaneous heating and cooling and heat recovery.”

Asked about ideal heat pump types, he points out that “as a building gets bigger, VRF makes more sense than say, mini-splits, because the power needs and piping needs for mini-splits are likely to outstrip VRF. You’re piping in series with VRF.”

If O’Connor is the VRF King, Prudence Ferreira is at minimum a duchess or baroness. She’s a hygrothermal – the movement of heat and moisture through buildings – specialist and passive house practice lead at Morrison Hershfield (Engineering) in Vancouver. The company recently completed an apartment building in Kansas City, Missouri.

That is becoming a pattern: “Again and again VRF has the best COP, and that’s what we used on this project.” Ferreira is working on tight envelope low carbon buildings all over North America, including projects in Vancouver and Ottawa; but at the moment her favourite is the huge Kansas project.

Second & Delaware is a 278-unit, 321,000 square foot seven-storey apartment building equipped with a Daikin VRF heat pump system for heating and cooling, two Systemaire energy recovery ventilators on each tower floor and a C65 Capstone micro-turbine combined heat and power unit for domestic hot water, which uses its waste heat to generate power. The building envelope is designed to the passive house standard. A 92-kW solar photovoltaic system provides renewable electricity. She says VRF seems to be the most efficient system for primary energy, “except maybe in climate zones 7 and 8.” 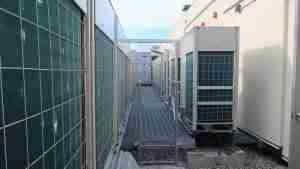 These rooftop VRF condenser units provide heating and cooling for The Jack, a new condominium complex in Toronto.

Another blue blood member of the VRF royal court would be Graham Baxter of G.C. Baxter Plumbing and Heating in Cambridge, Nova Scotia. He typically uses Mitsubishi or Panasonic systems, and has installed VRF systems recently in a hospice in Kemptville, a municipal building in Bridgewater and a professional centre in Middletown. But perhaps the best indication of his belief in the technology is that he installed it in the Baxter Group facilities too.

“We’re heating a welding shop and a sheet metal shop, each at about 5000 square feet with doors opening and closing. We’re maintaining them at about 60F and we’re also doing the 4,000 square foot office at around 70 degrees,” reported Baxter.

“There was a big energy-saving after I put it in. About $3000 to $4000 per year. It’s the VRF for most of it, with two small air handlers in the office. My only regret is that I didn’t opt for the models with heat reclaim, because my savings would probably have been even higher.”

Baxter says the system performs perfectly well down to minus 25 degrees, and that they also put in a backup electric boiler. “But the boiler never comes on. Don’t need it.”

Whether you’re a king, a duchess or a member of the unwashed masses suffering through the pandemic, your favourite building might soon be heated and cooled by a VRF system.

Says Ferreira: “COVID-19 has really shone a spotlight on the importance of cleaning up our carbon footprint and on indoor air quality. There are more people than ever before who struggle with indoor contaminants and the need for balanced ventilation. With all of us at home more, it’s time for better buildings with sophisticated systems like VRF.”

“We’re ahead of the curve,” says O’Connor. I have a daughter, so I care about climate change and VRF systems are carbon-free. VRF is the future!”