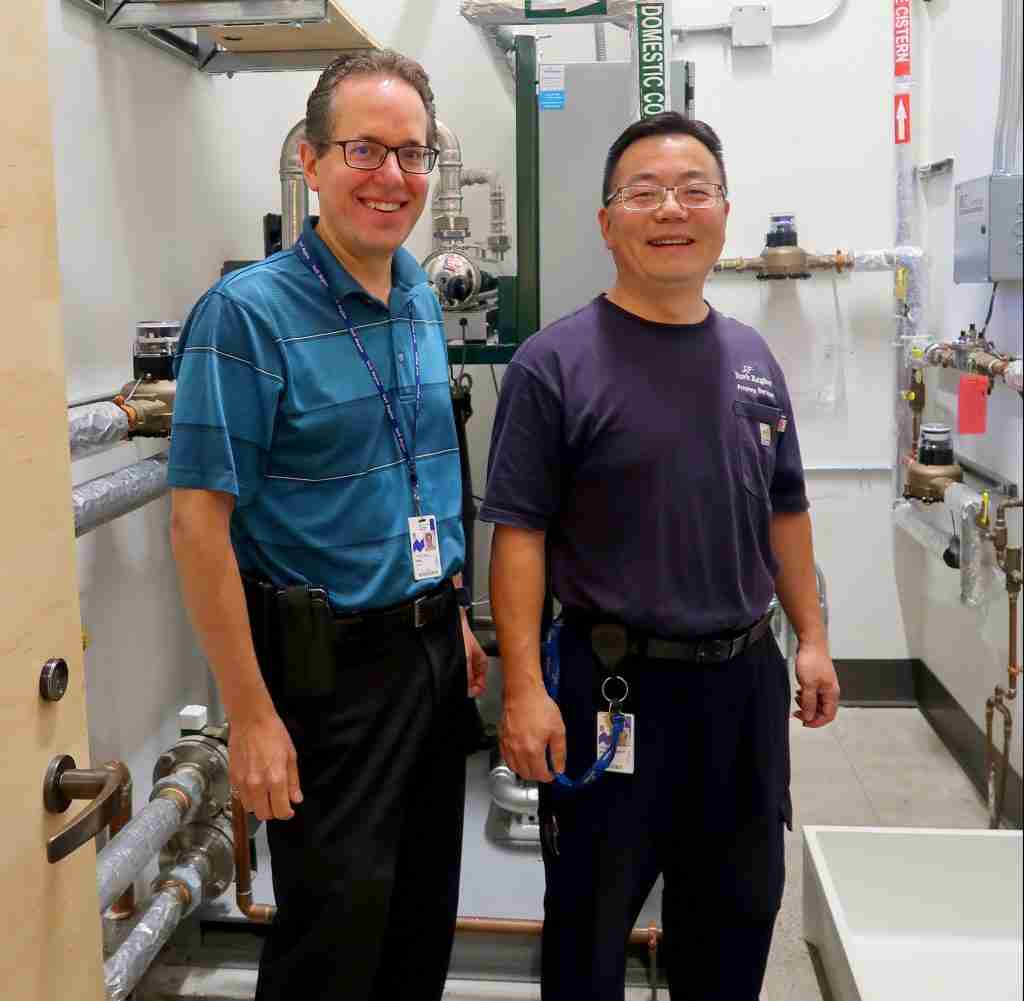 There is a growing interest in water management in both urban and rural buildings due to the demand for potable water and concerns about water pollution. Designers are creating water-positive buildings and net-zero water buildings. In these buildings, the amount of water that is captured on-site is equal to or more than the amount used on the site.

Governments and certification bodies care about the quality of water when it is returned to the natural ecosystem after on-site use. In high growth areas, governments want to reduce rather than add to their challenges with untreated sewage flowing into lakes and streams due to leaks, inadequate treatment capacity, and poorly designed 100-year-old storm and sewage systems. The Federation of Canadian Municipalities has estimated that $51 billion worth of infrastructure upgrades are needed in Canada.

Water bodies and aquifers are under stress from industry, agriculture, population growth and climate change. Building operations and septic systems must be modernized, even in rural locales. 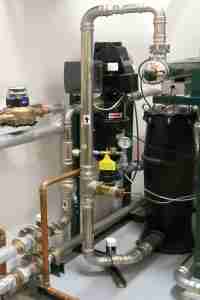 The Bill Fisch Forest Stewardship and Education Centre is about 1,000 sq. ft. and located on the Oak Ridges Moraine north of Toronto near Stouffville. “It’s a small footprint with a big impact. The facility relies exclusively on water provided by nature,” reported project engineer Raul Dominguez of Dialog Mechanical Engineering in Toronto. “It’s Canada’s first LBC (Living Building Challenge) certified building and LEED Platinum, so it serves as an example for others.”

He explains that there is no need for municipal water or sewage services; a well and UV filter provide potable water, and rainwater is harvested for use in toilets and urinals. An ultra-modern septic system employs a biofilter to remove pollutants from grey water and black water before returning it to the ground.

“A deep channel runs across the roof from east to west,” added Denis Poncelet, building engineer for the regional municipality of York, which owns the building. “The higher roofs on either side slope toward this channel.”

Within the channel, roof drains collect rainwater and pipe it to an underground cistern. It is then run through a Brae packaged rainwater system to serve water closets and urinals. Excess rainfall is infiltrated into the ground. If the cistern is empty, the on-site well provides makeup water.

The Brae rain-set employs a submersible, variable speed transfer pump that sends water through the treatment system and then to the storage tank. It has ultra-violet irradiation, self-cleaning strainers and a user-friendly touchscreen controller. It also has dry-run protection, soft-starting, and on-screen system alarms to protect against voltage or pressure anomalies. 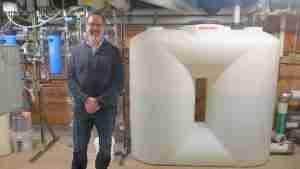 Brad Kahn with the rainwater collection system at the Bullitt Center in Seattle.

Wastewater is treated using a 3,000 litre per day Waterloo Biofilter septic system. Its trickle filter uses absorbent foam instead of the sand commonly found in a tile bed. The foam holds 10 times the amount of water, reducing the size of the system needed for the same volume.

It works down to minus 50 degrees Celsius and results in sand filter quality effluent [less than 10 mg/L carbonaceous biochemical oxygen demand (cBOD) and total suspended solids (TSS)]that is clear and odourless.

The Bullitt Center, a six-story office building in downtown Seattle, harvests water through its modern rainwater system; enough to meet the needs of the building, without “violating the natural hydrology of the site, the water needs of neighbours, and the ecosystem.” This makes it water positive, a requirement for its certification for the Living Building Challenge.

Rainwater is collected in a cistern, filtered and passed through an ultra-violet disinfection system, and then used in bathroom sinks, showers, and kitchenettes. Some are filtered but not disinfected, for use in foam-flush toilets and irrigation.

The cistern has enough capacity for four to six weeks of drinking water for the building, or 52,000 gallons, according to Denis Hayes, director of the Bullitt Foundation. “Treating potable water on-site will become important in many places in the future.”

He explains that the city is expanding geographically, and the population is increasing. “As it gets hotter there is less snowpack… Seattle depends heavily on two reservoirs, which are already both pressed to capacity. The best resource for us is Mother Nature… seawater that evaporates and is deposited on our roof.”

Greywater is water used for washing, flowing from sink drains and showers. At the Bullitt Center about 30,000 gallons per year of greywater is collected in basement holding tanks, then pumped to a constructed wetland on the building’s third-floor green roof area. Bioswales remove pathogens, then it’s released into the native soil below. Because it starts as rainwater, it becomes greywater that doesn’t contain heavy metals. 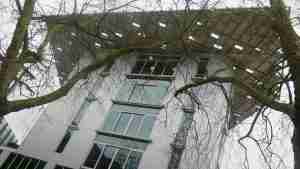 The Bullitt Center in Seattle.

“We monitor the parts per million and return water to the natural cycle well below permissible levels,” says Mark Buehrer of 2020 Engineering in Bellingham, Washington, who designed the water systems. The greywater system is covered by an urban wastewater septic permit.

“This building actually changed city and state standards. When we started about five years ago, there wasn’t much on the books regarding rainwater, greywater and black water.” They had to patiently educate and negotiate with the planning department and inspectors.

He says drip irrigation nozzles are laid underground about 12 inches apart in a landscape area six by 40 feet. The building’s foam flush toilets use about two tablespoons of water per flush. It’s an office building, but it includes showers and has no parking lot because occupants are encouraged to travel by bicycle or public transit.

Blackwater is used water from the toilets and urinals. In this building, black water is treated in basement composting units. The toilets and urinals use a mixture of biocompatible soap and water to clean the toilet bowl with each flush. Waste moves through a conventional four-inch pipe to a composting tank. The composting units in the basement produce a dehydrated, condensed solid, and King County regularly removes this leachate to a facility where it is used to restore a native wetland.

“This building has the newest water systems. Denis was careful during planning to make certain they would all work properly together, and we’ve been rewarded with a well functioning building,” reported Brad Kahn of Groundwork Strategies, a communication partner to the Bullitt Foundation.

“But if we had it to do all over again, I think we would reconsider the compost toilets. I’m not sure if the benefits justify the labour intensity of the compost removal and logistics.”

These buildings demonstrate updated tech versions of plumbing systems from earlier times. As Canadian governments struggle with infrastructure and water pollution, they might represent good options for construction professionals to avoid high costs and regulations.

To imagine the future, we can look at the U.S., where the Government Accountability Office reports that 40 of 50 state water managers are currently dealing with potable water shortages or expect they will be in the next five years. Numerous areas are also reacting to more intense flooding than ever before, stressing storm systems and frustrating water treatment efforts. Water management is likely to continue to be more important every day.